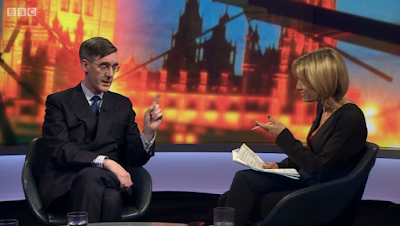 Thursday night's Newsnight - the last of the week featuring Emily Maitlis - drew a sharply contrasting response from two of the main partisan sides on social media.

The pro-Remain side was full of praise for Emily Maitlis; the pro-Leave side full of criticism for her.

That's because she'd spent the programme being much more antagonistic towards her pro-Leave guests than towards her pro-Remain guests, with a particular mocking laugh-in-the-voice that's fast becoming a trademark of her style being deployed against the kind of people BBC programmes like Newsnight seem to disapprove of.

Watch that whole edition and see the first four-way discussion between Jacob Rees-Mogg, Tobias Ellwood, Sarah Wollaston and Stephen Kinnock. In terms of interruptions, challenges and mocking laughter, her treatment of Jacob Rees-Mogg was much more antagonistic. Indeed, it was mostly 'Get Mogg! ' from Emily.("You whipped up hatred and fear", she told him at one point). He was singled out.

And in the closing three-way discussion between David Yelland, Suzanne Evans and former DUP spokesman Christopher Montgomery, Emily was in the former Sun editor's corner and continually arguing with Ms Evans and Mr Montgomery - the latter being the particular recipient of her derisive laugh.

Of course, this was just one edition. You have to judge such things over time. So go back to the previous Emily Maitlis edition, Tuesday's programme, and watch her handling of her first four interviewees - Hilary Benn, Conservative Remainer Steve Brine, Labour's Danielle Rowley and the ERG's Shailesh Vara. (I watched it as an experiment just now, having not seen it yet.) My assumption, having seen the way Emily's been going in recent months, was that Mr Vara would get the lion's share of the interruptions and challenges and be on the receiving end of that mocking laugh-in-the-voice. And so it turned out. He was singled out too.

(The closing journalists' discussion at the end had no obvious Leavers for Emily to go at).

Monday's programme saw interviews from Emily with Labour's Andy McDonald and the Conservatives Nick Boles and the SNP's Joanna Cherry and Labour's Jess Phillips, none of them Brexiteers. As you might guess, it was 'nice' Emily here all the way here, with the derisive tone notably missing-in-action.

Then came a studio discussion between Sir Craig Oliver, Rachel Sylvester, Dominic Lawson, with Mr Lawson being the sole (though pro-deal) Eurosceptic. And thus it began, with Emily going in on the outnumbered Mr Lawson far more than the others, saying "You don't believe that!" with a smirk, "gently suggesting" to him that he was "missing the point completely", etc.

And then came an interview with Suella Braverman of the ERG. What would happen? 'Nice' Emily or 'nasty Emily'? Well, it was somewhere in between, undoubtedly the least helpful-to-the-politician-being-interviewed political interview of the evening, with some interruptions, but not an example of the 'baddest' Emily.

Yes, maybe April should be Emily Maitlis Watch.
Posted by Craig at 18:30