Also appearing on the episode of Politics Live with James Cleverly, (Wed 6th March) was a youthful Corbynista named Lara McNeill with the typical Momentum style, back-of-the-throat delivery. Non-stop, strident and assertive.  Politics Live seems to include someone from Momentum or someone edgy from Novara Media in almost every episode, to drone on about austerity as if that policy was nothing to do with the profligacy of the ‘welfare state’ "no money left" Labour government.

I mention this chiefly because despite obviously spending a great deal of time on Twitter Lara McNeill still believed Rachel Riley really called Jeremy Corbyn a Nazi. (Until someone explained it to her during the programme) What does that say about her ability to comprehend the written word?

It’s a long story, but the saga concerning Owen Jones’s egg-throwing hypocrisy has left a trail of unfortunate misunderstandings and a possible court case pending. 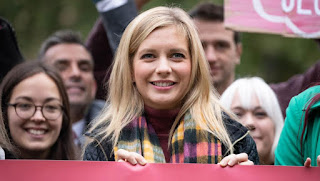 Rachel Riley, noticing his inconsistent approach to egg throwing - it’s fine to throw eggs at Nick Griffin the Nazi - but not ok to throw one at Corbyn the antisemite - reTweeted Owen’s own Tweet
about the Nick Griffin incident back at him:

“Oh I think an egg was thrown at him actually.
I think sound life advice is, if you don’t want eggs thrown at you, don’t be a Nazi. Seems fair to me.”

She did this to remind him of his initial response to eggs, by reTweeting it and simply adding:

Anyone who can read should be able to see that Rachel Riley is clearly highlighting Owen Jones’s hypocrisy. Surely?

One who misunderstood it in such a way was Laura Murray, daughter of Trade Union Corbynista and member of Corbyn’s inner circle, Andrew Murray.

“Andrew Murray, an influential aide in Mr Corbyn’s office, is a longstanding communist activist who became chief of staff to Len McCluskey, general secretary of the Unite trade union, in 2011. He is Britain’s most senior unelected union official.”

Daughter Laura was one of the first to leap to the conclusion that  Rachel Riley has called Corbyn a Nazi, and naturally barged straight ahead and Tweeted the accusation.  However, on realising her mistake she deleted not only the tweet but her whole Twitter account.

To add insult to injury, Ms Murray has been appointed onto a Labour Party board and now has the power to determine the fate of members accused of antisemitism.  You know, making sure they're let off and stuff like that. Jeremy Corbyn, or whoever authorised that appointment has a lot to answer for. Grovelling apologies, anyone?

“Jeremy Corbyn’s adviser Laura Murray (daughter of literal communist Andrew Murray)
is being sued by Rachel Riley for libelling her yesterday on Twitter. Murray has today been moved by the Labour Party from being “Stakeholder manager to Leader of the Opposition” to providing support to the party’s complaints department. You couldn’t make it up…

Nice for Jewish people to know that the complaints team is now advised by someone who lied about a Jewish woman on Twitter, and after thousands of retweets then decided to delete her entire Twitter account in shame. Looks like she will have a serious complaint in herself to be dealing with first…”

From the Jewish Chronicle: