Other side of the coin

It must be because I’ve clicked on a Tommy Robinson video once or twice, but I keep getting unsolicited Tommy Robinson-related alerts on the iPad. Well, I suppose it’s just as well, otherwise, I’d never get to know what’s informally known as ‘the other side of the story’.

It’s not that the MSM is completely silent about the comings and goings of Tommy Robinson formerly known as Stephen Yaxley-Thingy.

Did you read that piece in the Sunday Times (£) penned by, of all people, famous journo Andrew Gilligan? 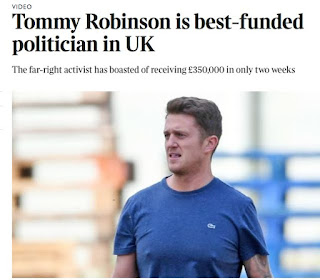 I’m surprised. Why would Andrew Gilligan write a piece that clearly implies that Tommy Robinson is in it for the dosh and that the ‘punters’ who shower him with donations are gullible idiots?

The article includes a couple of pictures of Robinson’s “House in Bedfordshire worth almost £1m”, which look as if they’ve been snatched from some estate agent’s brochure. Is that how investigative journalists go about their business, like riffling through celebs’ dustbins for ‘evidence’?

What was the point in that? Anyway, for those of you without The Times subs, the comments below the line are divided, but on balance I’d guess they’re slightly towards the “could be going better’ end of the spectrum.

One of the unsolicited TR live-stream type selfie-films I was sent the other day was of Tommy outside the home of a certain Mike Stuchberry in the middle of the night banging on the front door loudly and relentlessly.

The Independent features Mike Stuchberry’s account of the incident.

Tonight he paid me a visit. Twice.

“After tweeting the news that he was about to be served papers for defamation at his home in Central Bedfordshire, I got to see, in response, what his customary “doorstepping” was like for myself.”


According to Tommy Robinson, the door-knocking exercise was retaliatory, as previously 'a drug-addict' had been employed to serve the above mentioned ‘papers’ in person to the home of TR’s wife and children “where I do not live” accompanied by various individuals and newspaper reporters. I gather the police intervened before the troupe accomplished the mission.

TR felt this behaviour was intimidatory as well as cowardly as at the time he himself was abroad on a well-publicised trip. So, own medicine.

I don’t know if any MSM outlet has published “the other side” as outlined above, but it doesn’t seem very fair to publish one without the other.

As far as fearing the creeping Islamisation of the world goes, I’m with Tommy. The way he goes about disseminating his message is often both impulsive and reckless. However, just sitting on one’s arse blogging like I do has zero impact and comparatively little influence.

It obviously takes impulsiveness and recklessness to make an impact, not to mention considerable personal courage. I do wish he’d rein in some of his less defensible activities, but even so - power to his elbow.

As Nicky Campbell said on The Big Questions, Islam is the world’s fastest growing religion. Dozens of Islamic countries already exist, and Islam has infiltrated almost everywhere else, including Britain, with ever-increasing persistence. Antisemitism is rife throughout the western world, especially Europe. Meanwhile, your BBC is out and about, garnering the views of the people of Bradford.
Posted by sue at 17:23