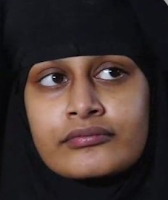 The opening discussion on this morning's Sunday programme has attracted interest.

StewGreen, for example, characterised the discussion as being a ‘Bring them home Muslim’ vs a ‘Keep em out Muslim’, the latter being in favour of deprogramming camps “on the Turkish border or in Cyprus”.

I thought Ismael South (the latter) was a thoughtful, engaging fellow but he did cast Tommy Robinson and Katie Hopkins as bogey-people, and the main reason for not letting Shamima Begum & her elk/ilk back into the country was that it would help their cause.

(WTF...those 2 don’t do anything wrong, they are not terrorists", commented Stew to that.)

William Crawley was, of course, very BBC throughout.

[My transcription was done with the help of TV Eyes - not that TV Eyes works well for radio. It kept mishearing the name 'Shamima Begum' and came up with several best-guesses: 'Jimmy Bacon', 'shimmy of bacon', 'some bacon' and 'mum Baker MPs'. ]