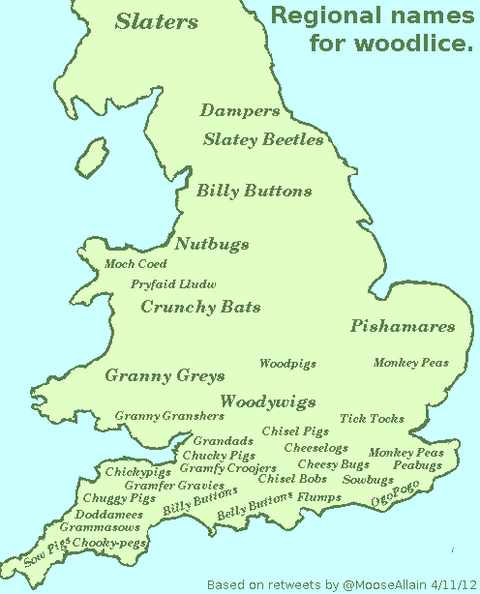 When the BBC iPlayer starts working again (it seems to have been down for a couple of hours now), you might like to listen to a delightful Radio 4 mini-series that's been running all week called A Guide to Garden Wildlife. It was presented by Brett Westwood and featured naturalist Phil Gates. (As it's radio we don't know if they kept their clothes on....oh, sorry, that 'naturalist' not 'naturist'.)

Hedgehogs, song thrushes, pond skaters, etc, all put in an appearance. As did woodlice.

Fascinating creatures, woodlice - crustaceans, related to crabs, lobsters and prawns. (Huge Firmly-Laughingstock will doubtless be deep-frying them soon.). They breathe through gills on their legs.

Like prawns, they can't stay out in the sun too long; hence their need to spend most of their time under dark, dampish recycling bins.

Several things like to eat them, including a species of spider called the woodlouse spider. It has sharp mouth-parts that allow it to penetrate its victim's hard exoskeleton and drink the body fluids of the woodlouse like a thirsty child drinking a milkshake through a straw.

There are many regional names for woodlice in the UK. My mum used to call them 'hard-backed buggers'. That, however, was her own name for them. She wasn't a fan.
Posted by Craig at 13:11