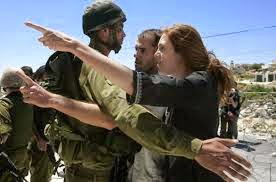 Talking of Jon Donnison, he saw fit to re-tweet this attack on a favourite blogs of ours a couple of days ago from one Bekah Wolf:

@HughNaylor @CiFWatch is not a real organization, just a crappy smear campaign run by a couple of dunderheads
— Bekah Wolf (@BekahWolf) July 27, 2014


And who exactly is this Bekah Wolf who doesn't reckon much to CiF Watch?


Bekah Wolf @BekahWolf Founded @PalestinePSP with my husband Mousa Abu Maria. I live in the U.S. and in Beit Ommar, #Palestine. Have worked in Palestine since 2003

Or, to put it another way, a pro-Palestinian activist who sometimes writes for Israel-hating sites like Electronic Intifada and Mondoweiss. (That's her in the picture at the top).