I don’t have a Twitter account. I’ve been told I should, but I already spend more than enough time making my arse fat with the blogging. I know you can Tweet whilst doing other things, say, jogging, playing tennis or tightrope walking but I like to concentrate on one thing at a time, monogamously.

Anyway, to a stick in the mud like me “going viral” sounds alien and “trending” sounds transient and here-today-gone-tomorrow, and not in a good way. So I don’t warm to the concept of the  BBC having a whole  ‘Trending’ department, with web pages and broadcasts. It sounds as though it’s meddling, creating trends as well as, or likely more than, reflecting them.

BBC World service is airing another Islam related topic at present. Ramadan and how it feels to fast, but in a jokey, ‘we’re all in it together' fashion. It makes you grumpy, they say. 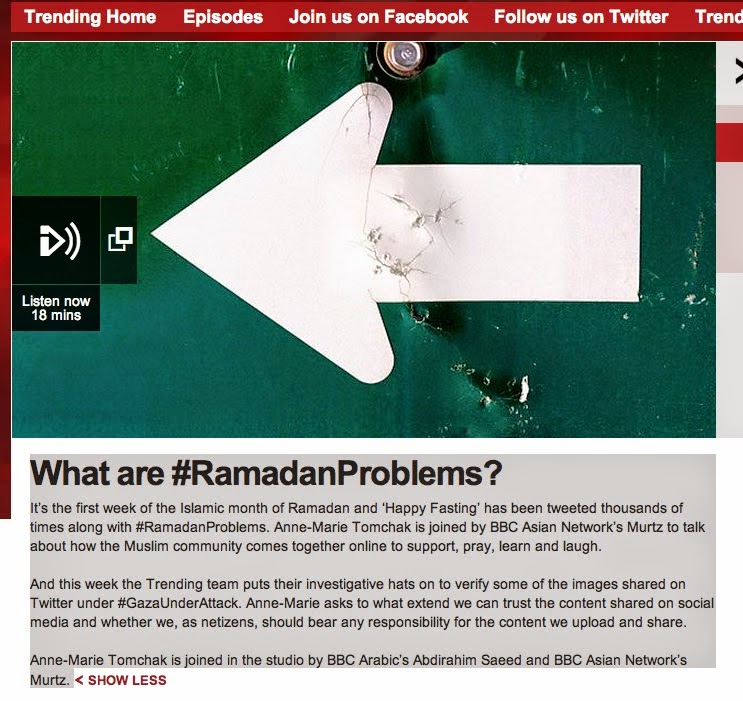 But the item that caught my ear was the one devoted to “hashtag GazaUnderAttack” , which they tell me has been trending, on and off, since one of the IDF’s previous incursions into Gaza, probably Operation Pillar of Cloud.   The thing about the latest flurry of activity over at hashtaggazaunderattack is that people (mainly from Malaysia, somewhere else I've forgotten and the UK) have been furiously Tweeting images of ‘dead babies’ willy nilly, no matter whether they were gleaned from Gaza or anywhere else, nor whether they occurred recently or from time immemorial.

They joked a bit, then interviewed a disturbingly nonchalant sixteen year old British Tweeter and blogger who readily admitted doing this - that’s Tweeting fake images - but was quite okay with that as she feels the world has to know what the mainstream media isn’t telling them.

What are #RamadanProblems?Duration: 18 minutes (going on at least 18 years in some people’s heads)First broadcast: Saturday 05 July 2014It’s the first week of the Islamic month of Ramadan and ‘Happy Fasting’ has been tweeted thousands of times along with #RamadanProblems. Anne-Marie Tomchak is joined by BBC Asian Network’s Murtz to talk about how the Muslim community comes together online to support, pray, learn and laugh.

And this week the Trending team puts their investigative hats on to verify some of the images shared on Twitter under #GazaUnderAttack. Anne-Marie asks to what extend we can trust the content shared on social media and whether we, as netizens, should bear any responsibility for the content we upload and share.