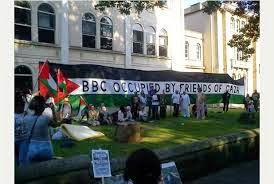 The claims of BBC pro-Israel bias being made by pro-Palestinian activists, their far-left supporters and some Radio 4 listeners beggar belief. Anyone listening to the daily news bulletins on Radio 4 who believes that the BBC is displaying an overall pro-Israel bias is severely mistaken (at best).

This, of course, is complete nonsense.

Here's an updated list of all the interviewees featured on Newsnight and on all of Radio 4's main current affairs programmes since the discovery of the murdered Israeli teens back at the end of June (up until yesterday).

As well as present and former U.S. and U.N. figures (the former generally tilting towards Israel, the latter generally tilting towards the Palestinians), you will note that, though official Israeli spokesmen/politicians outnumber Palestinian spokesman/politicians, most of the remaining voices strongly tilt the balance back again, being mainly critics of Israel, (including a significant number of Israel-bashing Israelis.

Pinning down precise numbers for who's on one side and who's on the other is tricky, but you are welcome to give it a go.

The likes of Oliver McTernan, Greg Philo, Avi Shlaim, Gideon Levy, Mira Bar-Hillel and Baroness Tonge are easy to place in the anti-Israel camp. Others less so.

The Israeli and pro-Israeli numbers have also been made up by an almost certainly disproportionate number of 'dovish' left-liberal voices (Daniel Levy, Ha'aretz's Avi Sharit, Jonathan Freedland, Rabbi Laura Janner-Klausner, the two Israeli Labor politicians). Robust right-wing Israelis from beyond the official sphere of Israeli politics have been largely absent (Dani Dayan being the obvious exception).

Among the Palestinians, Hamas and Fatah have each been heard in plentiful numbers. Unlike the Israelis and non-Israel Jewish commentators, they, however, have been speaking with one voice, pushing the same message: that Israel is bad. As have all the other Palestinian voices.

Anyhow, see what you make of the guest-list. Does it prove bias to you?