The unbearable pointlessness of Newswatch

Newswatch is completely pointless. It showcases viewers’ complaints about BBC programmes, and then someone from the BBC replies: “No. We got it right”.
Since it’s compiled by the BBC, produced by the BBC, conceived by the BBC, put together by the BBC,  I can’t see why it’s there. It’s like taking an exam with the answers already supplied.

Never mind, I like Samira Ahmed, so I watched an episode on iPlayer because it addressed the BBC’s reporting of the current I/P  conflict.

What a pointless programme it is though. A viewer’s comment was featured:

“ I wanted to congratulate the BBC and Jeremy Bowen. In the short time available he gave a clear and...(so difficult to do) balanced summation of a very complex situation”


Samira says a live comment from the corporation’s Middle East editor was the inspiration for that gem, but she didn’t say which particular live comment the listener was alluding to. I’m guessing something like this one.  The one where he tells John Humphrys that the Palestinians aren’t “irreconcilably committed to Israel’s destruction” despite a recent poll that clearly says they bloody well are.

To counter this vacuous bouquet, a brickbat from a listener who objected to:

“Three solid minutes of a pure rant, full of perfectly unsubstantiated accusations against Israel and Israelis”

We never got to hear precisely what he was on about, but we know, don’t we, that he meant this.

Samira didn’t mention that not only was this three-minute pure rant broadcast on the Today programme but it was also featured on various pages of the BBC website, nor did we get to hear anything specific about the contents of the rant or what exactly was wrong with it.

But most of the complaints were about bias in the other direction, says Samira.

A viewer was invited to express her anti-Israel prejudice on air. She didn’t like the tenure (sic) of the reporting, which encouraged us to have sympathy for the Israeli nation with their sense of outrage. I must say she looked pretty outraged herself while saying so.

“Really the only mention of the Palestinians was in regard to Hamas, as terrorists” (Oh no!)
.....which she didn’t think was very nice, but she was very pleased to see that reporting had improved since Tuesday, when the BBC started to apply all the sympathy-engendering tactics she was formerly objecting to when applied to Israel, to the Palestinians.

In the middle of her TV debut (I do hope it was ) another listener’s views were inserted, but they were so muddled I’ll pass on them, but needless to say his muddle was a pro Palestinian / anti-Israel one.

“Well,” says Samira, “we (BBC Newswatch) asked BBC News to give us their response to those views, and they gave us this statement”
We got it right. 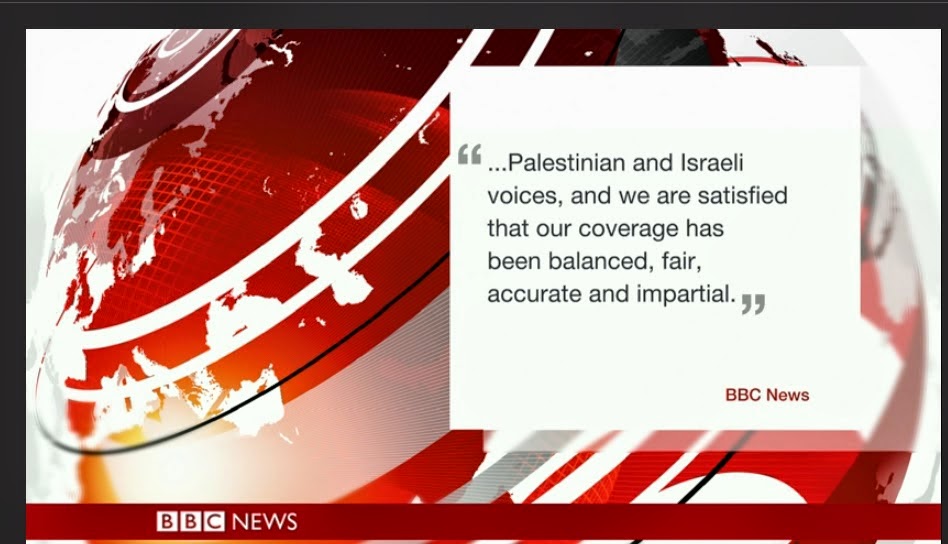 Well, they didn’t get News Watch right, though did they? Not if they were after balance anyway.