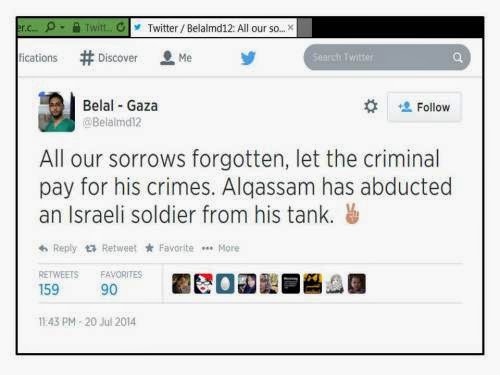 Instead of wall-to-wall footage of Lyse Doucet interviewing people like  Dr. Belal Al-Dabour who celebrated at the thought of an abducted Israeli soldier, and the notorious Hamas supporting Doctor Mads Gilbert and tearfully showing us round hospitals, (Lyse, remember what happened to Barbara Plett, sniff sniff?) What fate awaits those that blub on the beeb? ...as well as ‘emoting for reporting,’ what about telling us something we don’t know as well. News about, say, the extent and purpose of Gaza tunnels. 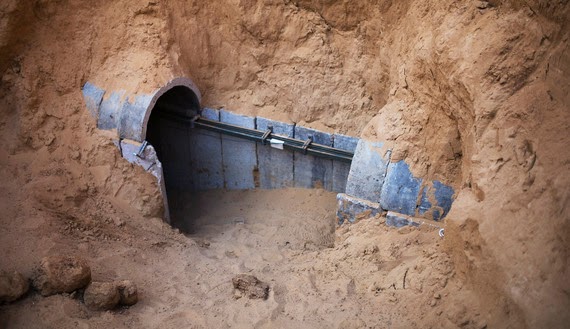 Where did these resources come from? Iran, the UN, the US, the UK?

"It was suddenly revealed that there are two Gazas: One is the crowded, impoverished and faltering Gaza, but there is also an “underground Gaza,” buried deep below the surface. As of now, the IDF has located 36 tunnels, but even during the current fighting, with the IDF still searching the area, terrorists have been sent to launch attacks deep in Israeli territory through tunnels that have yet to be discovered. According to the security source’s assessment, these are enormous tunnels, the planning and preparation of which probably lasted approximately three years. The cost of excavating, reinforcing and maintaining each tunnel is approximately $1 million, and as far as is now known, dozens of such quality tunnels were dug along the border between Israel and the Gaza Strip, from the northernmost part of the territory all the way to the south."

That must be why Hamas is willing to have a nice convenient hudna.

The Israeli exit of these tunnels is sometimes as far as half a kilometer beyond the Green Line. Over the years, once the tunnels were completed, they all required routine maintenance to ensure that they remained operational and hidden. It was even necessary to protect them from flooding during winter storms, a problem exacerbated by Gaza’s broken and collapsing drainage and runoff system. One can only wonder why Hamas — a movement that advocated the improvement of life quality for Gaza residents and offered them “change and reform” — did not even invest as little as one-hundredth of the cost of the tunnels to renovate Gaza’s sewage system. Instead, it invested in building more tunnels and rockets.

Then there are the tunnels along the border with Israel. These were intended to allow Hamas activists from the Gaza Strip to infiltrate deep into Israeli territory. Israel had already established a security fence along its border with Gaza, which has successfully prevented countless terrorist infiltrations and attacks. So the border tunnels were dug beneath the fence.Much to the misfortune of the people of Gaza, Hamas has invested far more resources in “underground Gaza” than in “upper Gaza.” The border tunnels and the defensive tunnels intended to ensure the safety of the Hamas command cadre proved that the movement’s priorities were flawed. The movement was founded as a welfare organization, intended to provide for the needy of Gaza, but instead it invested its resources in its own needs, at the expense of the population. Anyone who voted for Hamas in the 2006 elections as a way of protesting Fatah’s corruption received a very different kind of corruption instead. The “change and reform” that Hamas offered its voters was invested in its tunnels at the expense of the people of Gaza.But the tunnels extending into Israeli territory reveal another old-new aspect of Hamas’ behavior and methodology. The motif of shahada, or “martyrdom,” in the person of suicide bombers, has once again taken over the movement. During the second intifada, Hamas used all its force and means to encourage suicide attacks against Israel.

See? These Hamas folk are Islamists.They’re terrorists. You forgot that, didn’t you Lyse?