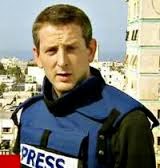 Good grief, it didn't take long, did it? Jon Donnison is back in Israel and has already become the story.

Via BBC Watch, comes this from The Daily Beast's Eli Lake:

Israel Still Swears Hamas Kidnapped Those Teens
After a weekend blowup on Twitter, it’s a case of 'he said, he said' between an Israeli spokesman and a BBC reporter.
Over the weekend it appeared that an Israeli official conceded something very valuable to Hamas. A BBC reporter in Israel tweeted out comments from the spokesman for Israel’s national police who allegedly said Hamas was not behind the kidnapping and murder last month of three Israeli teens on the West Bank, an incident that was the spark for the current war in Gaza.
Prime Minister Netanyahu had promised that Hamas would pay for the murder of Naftali Fraenkel, Eyal Yifrach, and Gilad Shaar. But on Friday, Jon Donnison, a BBC reporter, citing the the spokesman, Mickey Rosenfeld, called Israel’s claim that Hamas was responsible into question.
Donnison tweeted that Rosenfeld told him that while the cell on the West Bank was operating alone, it was affiliated with Hamas. However, it did not receive direct orders from Hamas leadership.
Those tweets became the basis for a widely shared blog post saying Israel now conceded that the kidnappers acted in a lone cell and Hamas had nothing to do with it.
The twittersphere exploded with I-told-you-so’s from pro-Palestinian activists, who claimed Israel had manipulated events surrounding the killing of the teens to prepare for and justify its assault on Gaza, which has since killed more than 1,000 Palestinians.
But when reached by The Daily Beast on Sunday, Rosenfeld said that he had told Donnison what the Israeli government had been saying all along. “The kidnapping and murder of the teens was carried out by Hamas terrorists from the Hebron area,” he told The Daily Beast. “The security organizations are continuing to search for the murderers.”
Donnison on Saturday said he stood by his earlier tweets.

As Eli Lake says, it’s a case of 'he said, he said' between an Israeli spokesman and a BBC reporter now, and we'll have to watch to see where this one leads.

If it's proven, however, that Jon Donnison misrepresented Micky Rosenfeld's statements then he would surely have to be dismissed by the BBC. It's that serious.

If he's telling the truth though, then it would be greatly to his credit as a reporter and embarrassing for the Israeli government.

Couldn't the BBC release Jon Donnison's recording of the interview, unedited? Surely such a thing exists?

For those who missed Jon Donnison's tweets on the matter, here they are (for posterity's sake):


Israeli police spokes Mickey Rosenfeld also said if kidnapping had been ordered by Hamas leadership, they'd have known about it in advance.
— Jon Donnison (@JonDonnison) July 25, 2014


When this is over, there remain a lot of unanswered questions about kidnapping and killing of three Israeli teenagers. #gaza #israel #hamas
— Jon Donnison (@JonDonnison) July 26, 2014


The answer to what happened to 3 Israeli teens will come from speaking to Israeli security officers, not from listening to politicians.
— Jon Donnison (@JonDonnison) July 26, 2014


I will stand corrected but regarding kidnapped Israeli teens but when have hamas leaders ordered something like that and not admitted it?
— Jon Donnison (@JonDonnison) July 26, 2014


For those asking, I stick by 100% tweets regarding comments made to me by Israeli police spokes Mickey Rosenfeld. He said it. Period. 1/2
— Jon Donnison (@JonDonnison) July 26, 2014


And what's more I suspect what he said is common knowledge in Israeli intelligence circles. 2/2
— Jon Donnison (@JonDonnison) July 26, 2014


Forgot what others added but those questioning comments made to me by Micky Rosenfeld should ask if he categorically denies. @tabletmag
— Jon Donnison (@JonDonnison) July 28, 2014