"Teacher, what will the Angel Gabriel do if a woman says 'No' to sex with her husband?" 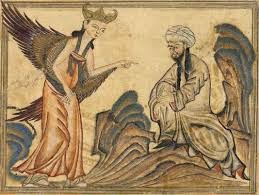 Talking about comparing and contrasting things, the difference between Sky News and BBC News in their reporting of terror chief Peter Clarke's report into the Trojan Horse affair in Birmingham is quite striking.

From the BBC's Sean Coughlan we get:

Teachers could face misconduct inquiries, she [Nicky Morgan] told the House of Commons, after Mr Clarke's report found a social media group called the "Park View Brotherhood" used by male senior staff at Park View School.
Mr Clarke's report said this included "grossly intolerant" messages.
He said the social media messages included "explicit homophobia; highly offensive comments about British service personnel; a stated ambition to increase segregation in the school; disparagement of strands of Islam; scepticism about the truth of reports of the murder of Lee Rigby and the Boston bombings; and a constant undercurrent of anti-western, anti-American and anti-Israeli sentiment".

From Afua Hirsch of Sky News, however, we go beyond quotes to get some of the shocking details:

Clarke scrutinised 3,000 messages sent via a private, all-male group called the Park View Brotherhood on social networking app WhatsApp, characterising them as "highly offensive".
The messages included the claim that the murder of fusilier Lee Rigby in Woolwich was a "hoax", that gay people are "animals" and their attempts at marriage "Satanic" and that women belong in the kitchen and have a "perpetual role serving men".
Although these messages were sent in private between teachers, the report reveals a correlation between this ideology and changes in the curriculum at the schools concerned.
At Park View, the report says, all discussion concerning sexual orientation was removed from sex education lessons, and boys were told in a worksheet that: "If a woman said 'No' to sex with her husband, the Angel Gabriel would strike her down and condemn her to an eternity of hell."
Girls and boys were segregated and, at Nansen Primary School, the school day was considered inappropriate both for the young age of the children and for a secular school.

Teachers at the centre of the 'Trojan Horse' plot to takeover Birmingham schools exchanged messages that the murder of soldier Lee Rigby was a hoax, it emerged today.
A damning report into Birmingham schools has unearthed 'compelling evidence' of an attempt by a group of hardline Muslims 'to gain control of governing bodies', Education Secretary Nicky Morgan said.
The investigation, led by former anti-terror chief Peter Clarke, revealed details of a WhatsApp group called The Park View Brotherhood which also included a description of homosexuals as 'animals' with 'satanic ways’.
Mr Clarke was called in to investigate claims that schools in Birmingham were taken over in a plot to impose hardline Islamic rule. His was one of four inquiries into the allegations.
During his probe he was handed a dossier of more than 3,000 messages posted in the WhatsApp group from April 2013 until it was shut down in March.
Some of the messages suggested the brutal murder of Lee Rigby and the Boston Marathon bombings were both faked.
One post above a YouTube link attributed to someone identified as Teacher L on 24 May last year said: 'ATTACK ON ISLAM! Plz watch and share ASAP before they remove it!!!!! London butcher incident; It’s is a hoax And this is the link to reveal it.'
A message sent by Teacher C on 19 April said: 'Watch PROOF! Boston Marathon Bombing is Staged Terror Attack on YouTube.'
In May last year Mr Faraz allegedly posted a link to a news article about gay marriage followed by the message: 'These animals are going out full force. As teachers we must be aware and counter their satanic ways of influencing young people.'
There was evidence of young people being encouraged to 'adopt an unquestioning attitude to a particular hardline strand of Sunni Islam'