Anti-farmer bias at the BBC? 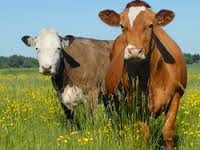 In other BBC bias-related news, according to the Western Daily Press:

BBC is accused of bias over livestock farming coverage

The paper quotes former farmers' leader Richard Haddock accusing the BBC of showing "anti-farmer bias" with a report suggesting beef production is 10 times more damaging to the environment than any other form of livestock production. Mr Haddock's beef? That "the [BBC] report is based on studies carried out in America, where production methods are vastly different from British – but fails to make this sufficiently clear."

But he says few farmers will be surprised by it since the BBC's programming agenda now has a distinctly anti-livestock farmer slant.

Mr Haddock said,: "How they raise beef in the US and how we raise grass-fed beef here are as different as chalk and cheese. We don't raise cattle on giant feed lots and grass-fed cattle have a natural diet. They are not fed on soybeans – one of the feedstuffs the report quotes."

As for the BBC's report, well, he thinks it's bullshit:

The report quotes unnamed 'other researchers' as saying the conclusions of the new study are applicable in Europe.
Mr Haddock said: "That could only be asserted by someone with not a shred of knowledge about grass-fed beef production as practised across the South West.
"The only common factors relate to waste products. In fact, beef rearing here has a tremendous environmental benefit since cattle-rearing areas are some of the most well cared-for and attractive landscapes we have and far more attractive to wildlife than cereal or arable farms.
"They also act as a magnet for tourists: studies have shown it's the quality of landscapes in the South West that motivates more than two-thirds of holiday visits.
"No-one would want to visit an American feed lot, but unfortunately these days if the BBC gets a whiff of an anti-livestock farmer story, tiny details such as these are conveniently swept aside."

The report in question comes from BBC environment correspondent Matt McGrath. He seems to have taken over from Richard Black as the BBC's chief red-rag-to-a-bull correspondent for those critical of the BBC's environmental reporting (especially over climate science).
Posted by Craig at 06:25