"But could it also be disproportionate?" 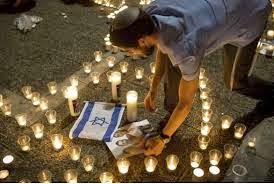 The BBC isn't a monolith. While tonight's PM covered the funerals of the three murdered Israeli teenagers in an exemplary fashion, last night's Newsnight disgraced itself.

The programme's introduction from Laura Kuenssberg began as follows:

The three kidnapped Israeli teenagers are found dead in a pit on the West Bank. Hamas is getting the blame and, if history is a guide, the Israeli response will be emotional. But could it also be disproportionate? We hear from the Israeli and Palestinians.

Then there's the suggestion (as I heard it) that Israel's response is likely to be merely "emotional".

Then, worse of all (and most clearly of all) comes the question that Newsnight (last night of all nights) decided it was an appropriate question to lead with: "Could [the Israeli response] also be disproportionate?"

If any passing Electonic Intifadaistas would care to explain how that isn't an anti-Israel angle I'd love to hear from you (just as long as you refrain from anti-Semitic insults in replying).

Such EI types might also care to comment on Laura's second introduction (after the Newsnight theme tune):

Good evening. "Hamas will pay". The Israeli government is already promising fierce punishment for the death of three teenage Jewish settlers found dead, hidden under rocks, in a field in Hebron in the West Bank.

Given that two of the boys did not live in West Bank settlements but across the Green Line in central Israel, to where they were returning after leaving school, opting to describe them as "settlers" isn't just plain wrong, it's also deeply loaded, turning the boys from a pair of 16 year old pupils and a 19 year old student into bad-guy "settlers" - because 'settlers' is a dog-whistle word for a certain type of person (and, sadly, there are lots of them).

For more on this, please read BBC Watch [and, of course, Sue's post, sitting atop this one.]
Posted by Craig at 22:18