As you may have noticed today has been 'Jon Donnison Day' across the BBC-monitoring pro-Israeli blogosphere.

Alan at Biased BBC spotlighted a report from Jon Donnison which he (Alan) says is "a subtle pro-Hamas piece", and that very same report is also the basis of Hadar's latest post at BBC Watch.

Now, we can argue till we're blue in the face about whether that article is pro-Hamas or not, but one thing does seem certain (if 'seeming certain' isn't a contradiction in terms): Jon Donnison's piece contains a passage that appears at best naive - and possibly much worse.

This is the passage in question:

Palestinian grief. Not in Gaza, but in the West Bank. Hashem Abu Maria was shot dead by Israeli soldiers last week as he demonstrated against Israel’s actions in Gaza. He was 47 years old, a father of three and worked for a children’s charity. By his graveside his wife Samira tells me Hashem gave his life trying to protect children.

I watched that and thought he sounded a lovely, harmless man, and that it was a shame that he'd been killed.

But...Hadar has used that wonderful thing, the internet, and found out something else about the late charity worker who "gave his life trying to protect children" (something the highly-experienced Jon Donnison appears not to have noticed).

Here's a clue at to what it is: 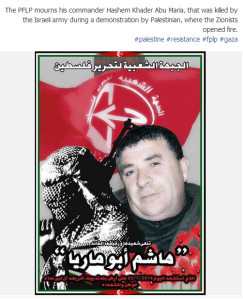 It seems, from Hadar's account of an obituary and a Facebook page, that that nice Hashem Abu Maria was a fighter commander with the Popular Front for the Liberation of Palestine (not to be confused with the People's Front for the Liberation of Palestine) - a group which the US, EU and Canada consider a terrorist organisation. A...fighter...commander.

I really wouldn't want to have my heart strings tugged on behalf of a terrorist.

Maybe, Lt Col Peter Lerner or Micky Rosenfeld could ask Jon Donnison about that the next time they see him.
Posted by Craig at 18:10