The Fisk jumps another shark

Do you know the original of the phrase 'jumping the shark' (when something reaches such a low point that it becomes utterly absurd and passed-its-sell-by-date)? It came from an episode of 'Whacky Days' when The Fisk got off his motorbike, donned jet skies, raised his thumbs, said 'Heyyy!' and, yes, jumped a shark: 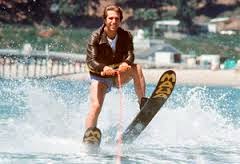 The Fisk (real name Robert Fiskerelli) has been jumping sharks every since and, as CiF Watch points out, jumped a particularly huge great white over at The Independent yesterday in an article called:

It's not just radicalised Islamists – what about foreign fighters who flock to the IDF?
Is the Government interested in UK citizens who have been fighting in Israeli uniform in Gaza in the past couple of weeks?

Yeah, right, Fiskie. We Brits need to have sleepless nights about returning Jewish fighters serving with the IDF? They are going to blew us up, are they? I don't think so - and neither does anyone else who isn't an 'multi-award-winning' anti-Israeli fruitcake who jump sharks on a twice-weekly basis.
Posted by Craig at 18:32