A good pair of ears

You’ll all be aware of the BBC’s hard-hitting series HardTalk. There’s a web page that states its aim. I think HARDtalk was originally conceived as a vehicle for the definitive, serious, intellectually honest examination of pressing issues of the day.
A young-looking Stephen Sackur adorns the page, finger pointing incisively at an off-camera interviewee, who would no doubt be shaking in his boots. 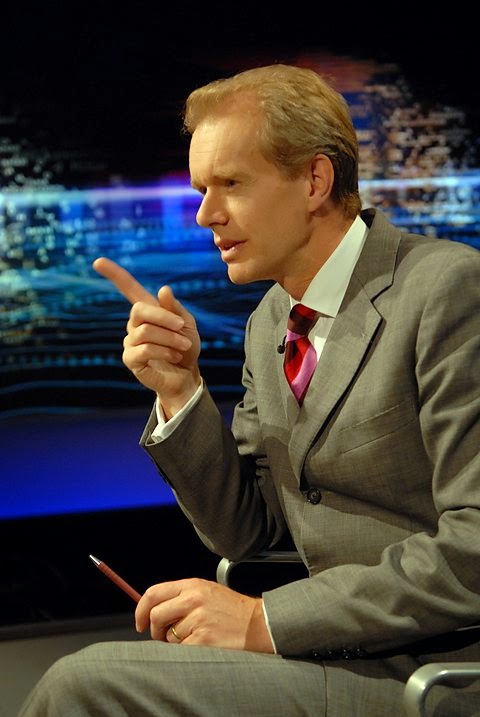 QUESTION: If you’re endlessly curious about what makes powerful people tick and you love to ask questions, what’s the best job in the world? ANSWER: Presenting HARDtalk

Hmm. What if it’s several years later and you’re  jaded, worn out and immersed in BBC groupthink?

Whereas a poor interview doesn’t bother with all that exhaustive stuff and goes for the populist, superficial reiteration of the BBC’s predictable assumptions.

"We have the time to dig deeper with our guests. To take them to the territory where the tough questions lie. But it only works if we have done our homework.”

Quite right, and if we haven’t done our homework it’s a load of crap.

"A good interview starts with exhaustive research and ends with intense exchanges that can be a revelation. Having plenty of on-the-ground reporting experience from the world’s hotspots doesn’t do any harm either."

"HARDtalk isn’t about shouting, or point-scoring. It's about asking the intelligent questions our audience would be asking if they had the chance to sit in the HARDtalk chair.

Unfortunately the HARDtalk of today is all about shouting, not allowing full answers, rudeness and pandering to the ill-informed.

"As long as the privilege is mine, I’ll cherish it."

With reference to the episode shown late last night with Stephen Sackur and Yuval Steinitz, the Israeli minister of intelligence, characterised by rude interruptions and an unresponsive attitude towards answers to a somewhat crass line of questioning, this episode highlighted a disparity between HARDtalk’s stated aspirations and its present day incarnation.

After a comparatively gentle opening, Stephen Sackur established a pattern of putting a dumbed-down series of Hamas propaganda-driven questions about the current 'truce' and ignoring Mr. Steinitz’s answers.

Hamas has succeeded, posits Sackur. How? By getting Israel to “ease the blockade, for example”
Wrong! There never was a blockade of humanitarian aid and supplies. Only tunnel-constructing matter. Hamas has basically agreed to the status quo.

Stephen Sackur gurned his way through the lengthy emotive question in this clip:

“How close, and you can tell me now, because the ceasefire is in place, how close did the Netanyahu government come... to giving a green light to the full military reoccupation of Gaza, we know that you in the cabinet were briefed upon it by military commanders, how close did it come to that?”

Of course, there’s nothing wrong with such a question if it was put in the spirit of the genuine curiosity of which the website boasts.

But it was not put in that spirit. The expression  of contempt on Sackur’s face told a different story.
His delivery implied a widely held but mistaken assumption that Israel is an all-powerful military entity with malevolent expansionist aspirations.

The BBC’s perception of a possible reoccupation of Gaza seems to be one of a trigger-happy jackbooted army marching in with the express intention of oppressing the people and terrifying the life out of them.

In fact if Israel does have to implement this last resort plan, Gaza may very well be freed from the tyranny and corruption of Hamas.

The reconstruction would undoubtedly be speedier and more thorough and the  quality of life for the ordinary Palestinian in the street would improve dramatically.
Israel doesn’t desire it. It would be an unwanted strain on them. But lazy, Israel bashing types prefer to assume that the greedy Jews of Israel can’t wait get their hands on anything going.

Mr. Steinitz pointed out the disparity between the world’s condemnation of Israel for doing precisely what is accepted as par for the course in the case of every other country in war.

SS:
“I’m surprised that you are surprised by the international reaction when more than 2000 people have been killed, mostly civilians, when UNICEF says that more than four hundred and fifty children have been killed inside Gaza, and you are surprised that the international community has a problem with that?” said Sackur, with a furrowed brow and more animation than a souped-up Fiona Bruce.

YS:
“Look, we also have a problem with that. This is a terrible tragedy that Hamas brought upon itself and unfortunately also upon the people of Gaza, but I’m surprised, Stephen, that you think that it’s irrelevant that Hamas, in the past when it was possible for it, sent hundreds of suicide bombers to our streets killing more than one thousand Israeli civilians and only when it was pushed from the West Bank into Gaza they shifted the tactic because it’s impossible to rely on suicide bombing from Gaza and now they’re launching rockets from Gaza into Israel..”

SS: (interrupting)
“But are you prepared here and now to say to me now that it’s over..”


“Just a moment, let me complete that answer. The Hamas aim to destroy the state of Israel. the Hamas behaviour, to use the suicide bombing strategy against Israeli civilians, the Hamas future, ultimate goal, to bring total destruction to six million Jews and to the Jewish state, this is very relevant to our current fighting with Hamas and....”

YS: (interrupting)
“It’s also very relevant that Hamas has started the violence and refused so far eleven ceasefire proposals. Don’t forget Stephen, the ultimate commitment of any democratic government is to protect its citizens. Our citizens are under daily bombardment of hundreds of rockets from gaza on a daily basis...”

Onwards and upwards; to the ‘deliberate’ bombing of UN facilities when “you knew” there were civilians sheltering therein - “Are you prepared to admit you got it wrong?”

“There is some hypocrisy in this criticism”

Yuval Steinitz reminded  the viewers that when the US and Britain found themselves in similar circumstances in Iraq or Afghanistan, and did their best to avoid civilian casualties, they were fighting against terrorism and we are fighting to defend our people against terrorism - . “I didn’t hear such criticism then.”

“Are you saying that that condemnation (Ban Ki-moon etc) “from your friends” means nothing to Israel?” gurned Sackur.

The good pair of ears were now well and truly switched to off position and the questioning turned to the UN enquiry, and “will you or won’t you” accept its findings.

From then on Sackur’s interruptions, deafness and facial expressions descended into parody. It’s as if he suddenly remembered that the anti-Israel majority would have to be placated and if he deigned to give Mr. Seinitz a fair hearing, the BBC would be bombarded with complaints from the ‘we are all Hamas now’ lobby.
Posted by sue at 12:54