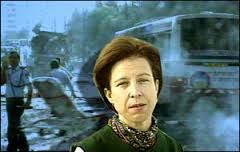 Following on from Sue's post and as part of Is the BBC biased?'s public service remit, here's a full transcription of this week's Feedback coverage of the BBC's Israel-Gaza coverage.

The BBC's Lyse Doucet spells out the BBC's position, revealing a good deal about the BBC mindset in the process.

Roger Bolton: First, the story that continues to dominate our inbox - the BBC's coverage of the Israel-Gaza conflict.


Last week, you may remember, we interviewed Phil Pegum, the producer of Radio 4's The Moral Maze, about what some listeners claimed was the overheated behaviour of some of the panelists in an edition called 'Just War and Gaza'.

Following that interview we have received many more emails about The Moral Maze and about the BBC's coverage of the conflict in general.

Many of you think the BBC is biased and is either pro-Palestinian or pro-Israeli:

Listener 1: Hello, my name is Ailsa McLellan and I'm phoning from Ullapool Wester Ross. I'm so sick of your skewed coverage of the conflict in Palestine. Another U.N. school has been repeatedly shelled, killing children and parents in their sleep, yet the bit of coverage on this incident that you chose to cover in the short section of news at lunchtime was the Israeli spokesperson, Paul Hirschson, maintaining that there were often Hamas bombs hidden in schools. I can hardly listen or watch the BBC at the moment because of the weak line that you take on this overall.

Listener 2: Hello, my name is Daniel Stillit. I live in London. It seems to me that what we have here is one long condemnation of Israel. I absolutely feel that the BBC's credibility is in doubt. I cannot trust it. I cannot rely on it for comprehensive and balanced information.

Roger Bolton: As the Gaza conflict has escalated so the pressure on reporters on the ground has done so as well. Lyse Doucet is the BBC's chief international correspondent. I spoke to her this week shortly after she had returned from Gaza.

Lyse Doucet: Every day is a battle to survive, but most of all for Gazans - the nearly two million Gazans who are now living in the midst of a very, very punishing war. The BBC is fortunate in that we have armoured vehicles. So we have two armoured vehicles which we have to share among our teams. When something happens, for example if a school's been hit, you drive as far as you can, you measure where the fire is coming from - both rocket fire going out into Israel, incoming tank and artillery fire. You can hear it all the time. You have to be constantly making judgements about how far you can go.

Roger Bolton: When you're trying to find out what happened - which is your primary jobs - are there attempts all the time to mislead you?

Lyse Doucet: But 'twas ever thus in a war...

Roger Bolton (interrupting): So there are?

Lyse Doucet: ...because they say, the great truism about war, the truth is the first casualty. Every journalist now working on either side depends on further statistics - two sources of information: the Gazan Health Ministry...which I think is doing a fairly good job given the circumstances they're working under, gives us the figures of the dead, the injured, which are based on how many bodies come in the morgue, how many people are received at the hospital...and, similarly, the Israeli Defence Forces tell you how many attacks did Israel carry out, how many rockets were fired from Gaza, how many of them were intercepted by their very effective, American-financed Iron Dome system. So they give you all those.

And I think that, you know, both of them have a high degree of legitimacy. We're often challenged to say, "How come you're taking figures from the Hamas-controlled Health Ministry?", but I think, by and large, they are as close as possible to being an accurate reflection.

Roger Bolton: Now, the allegation made by the Israelis and by those who also perceive you as being biased in some way is that you're not pointing out, or not working hard enough to discover, whether Hamas is, in fact, firing rockets from schools, from hospitals - in other words, is embedded in precisely those areas which are targeted. Have you been able to discover whether this is a conscious policy of Hamas?

Lyse Doucet: You know, back to our point about in all wars it's very difficult for security reasons, for propaganda reasons, to get to the full truth. I try to concentrate on what I see. And you can actually see, if you look hard enough, you can see a lot.

For example, there was one day, on a street. We walked passed an entry, an alleyway, into a building, and a man came out and he gestured to some of the young men who were walking on the street...He's sort of saying, 'Go, go, go!'...and we walked passed, not really knowing why he said that, and then immediately a mortar was fired. So we knew he had been firing mortars from inside that building.

There's no doubt that Hamas is firing from...and Islamic Jihad is firing from...inside residential areas. They're firing from open fields. They deny that they're using Palestinians as human shields. Of course, it might depend on what your definition of a 'human shield'. Their defence would be...and the defence of Gazans when you say to them, "Don't you blame Hamas for your fate? They're using your homes"...they say, "Well, where can they go? There's no place for them to go. It's such a densely-populated area that they've no other choice but to fire from in there."

Roger Bolton: Sometimes, do you have to go, "I can't do anything. I've got to go a walk. I've to stay away, or otherwise my anger or my emotions will overcome me"?

Roger Bolton (interrupting): You have to be a human being.

Lyse Doucet: Yes, but you're...In being a human being, I always say our journalism is defined by the question we ask. So we ask, "Why have so many children been hit?", "What was the target in this place?", "Why, in the case of Hamas and Islamic Jihad, why are you firing rockets from residential areas?"

My job is to be the story teller, to tell other people's stories, and I need to be...to have composure to do that. And I've wrestled with this issue about taking sides and how far we can go a lot, because, in my career, I've often been reporting on areas where there are two sides, three sides, and all sides.

We're talking about international human rights laws. There are laws, there are rules, even in war.

Roger Bolton: How difficult is it to face the sort of accusations of bias that we get to Feedback, which you must get as well? Both sides saying, "You're clearly biased. You're clearly deliberately giving one side of the story"?

Lyse Doucet: I have to say it pains a lot of us. Most of the correspondence producers who've been working on this latest story have been going back and forth to the Middle East, to this particular region, for decades. And I can sit here and put my hand on my heart to say, "Our conscience is clear", that we do make an effort to try to cover all sides of the story.

But we also understand that people feel passionately about these stories. There are, of course, the lobby groups whose job it is to keep pushing and putting pressure on us - lobby groups on both sides - but there are also the people who just care a lot about this story. And so if they see something on air...see something, hear something on the radio or something online...they vent their anger against us, because they see us as somehow not telling the real story.

And I have found...my own experience has been with most of these people who, for example, contact me on Twitter and say, "You are this" or "You are that", that I respond and say, "Thank you very much. I'm sorry you have that impression. We are trying". Nine times out of ten they come back and say, "Thank you". Some people just want to be recognised, that they want us to know that they believe we're doing it wrong.

And sometimes they make legitimate points. I'll say, "Actually, they have a point. I must..." And I say, "Thank you. I should look more closely at that. You're right, that is something.." So it's very useful as well.

So all I'd say to your listeners is...and maybe they won't believe me...but I can speak for myself and all my colleagues...We are trying, and we will keep trying to tell a very difficult story.