Iraq, Alevis in Turkey, Confucianism, domestic abuse, the Ordinariate, a 'super diocese', and Rotherham and Muslims

This week's edition of Radio 4's Sunday began with the subject of Iraq, launching it with the Archbishop of York's asylum calls for UK to grant asylum to Christians from Iraq.

What followed, however, was an interview with Katie Harrison from the charity Tearfund. She has just returned from N Iraq and her testimony was a must-hear, which - just in case you didn't hear it - I'll partially transcribe, as what she was describing just beggars belief in 2014:

Many people were telling us of the horrors of sex-slave markets. So, apparently, what happens is that women are rounded up in a town and taken to the centre of the town. Married women go through this very enforced fast divorce from their husbands so that they become released for sale, and single women are examined by somebody who decides whether they are a virgin, and a virgin will command a higher price and there, in the town square, they're sold off to men who will buy them. They then go through this very quick compulsory marriage ceremony, which basically justifies the rape that will take place later that day, and for some women they will then stay with the person who has bought them, if he wants to keep them, or then, after he's raped them, he takes them back and sells them on again, for a cheaper price this time because they've been used.

Is that what some of those many hundreds of British Muslims who have gone to fight with Islamic State (those pious Muslim defenders of Islamic virtue) are up to?

Edward Stourton asked Katie Harrison about the Archbishop's calls for them to be allowed to live in Britain. She replied that some do want safe havens away from Iraq but that others - especially the smaller faiths - would prefer to stay where they belong, in lands that are the cradle of their faith. 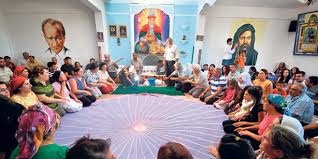 And talking of persecuted minorities, the next item examined another case of a majority Muslim population oppressing a religious minority. As the programme website's blurb puts it:

This week Recep Tayyip Erdogan became Turkey's 21st president. Dorian Jones reports from Istanbul about the country's Alevi minority who claim they are being targeted by Erdogan and his supporters.

Sunday has been closely watching Turkey for some time (though less so in the past year). I used to feel that it was trying to 'understand' (in typical BBC fashion) the Islamist government of Mr Erdogan, but that 'understanding' has perceptibly soured over time, especially since the protests of last year.

The Alevi community is a minority Muslim group. They comprise some one-fifth of the Turkish population.

Alevis differ from other Muslims in many regards. Men and women pray together through dance and music. They don't worship in mosques. They use pictures, especially of the Imam Ali (from whose name the word 'Alevi' derives - as, indeed, does 'Alawite' (President Assad's sect in Syria)). Sunnis see them as heretics, and many atrocities have been perpetrated against them over history, under both the Ottomans and the Turkish Republic.

They tend, politically-speaking, to be secular and centre-left in orientation - and, thus, strongly opposed to Mr Erdogan's Islamist agenda. That has been noticed by Mr Erdogan, who has been accused of using sectarian language against them, describing them as "part of a plot" against him, and "terrorists". Alevi-dominated areas of Istanbul have been declared an "Earthquake risk", and Alevi houses could be destroyed en masse as a result. All of which feeds an existing hatred. Crosses have apparently been painted on Alevi doors, signifying death.

To their credit, some Muslim leaders in Turkey have stood up to all this and denounced the "deep prejudices" held against the Alevis.

Now, what does all this make you think? It makes me think that the Alevis stand on a slippery slope, a continuum - a slope that slides perilously towards what's being done to other minorities in the region, culminating in the fanatical Sunni supremacism of Islamic State.

Sunday seems to have woken up to the dangers of Mr Erdogan's 'benign' Islamism.

Next came an interview with Martin Palmer examining the question, 'Is Confucianism experiencing a revival in China?'

The answer appears to be an emphatic, 'yes' - and Martin is in a position to judge as the Chinese government has just backed his new Confucian alliance.

As you will doubtless be aware, Confucianism dates back to the 6th Century B.C. It believes in a moral, hierarchical order to the universe which is given by Heaven and which can be taken away by Heaven.

As to whether it's a religion, Martin Palmer noted that, since 2006, 500 Confucianist temples have sprung up in China and that Confucius himself has been worshipped as a god for at least a thousand years. That said, he places greater weight on Confucianism as a moral code.

He made the striking statement that almost no one in China believes in Communism any more. They regard Marxism-Leninism as a busted flush. That said, they see the Communist system as having restored some order after the chaos of the warlord period of Chinese history. In other words, they see it in a Confucian way.

Confucianism was attacked under Mao. For only the second time in its long history its books burned were burned, and its temples were either destroyed or taken over during the Cultural Revolution.

That's all changed now. The new Chinese president mentions Confucius in all his speeches, Martin Palmer said, and Confucian ideas back up his ideology.

It helps, he added, that Confucianism is seen as less dangerous than Christianity (a foreign religion) - a factor that has helped Daoism revive too.

Over 800 Confucianist institutions have been launched by the Chinese government across the world in recent years, 16 of them in the UK.

Sunday likes to back a good cause and so it threw its weight behind the Archbishop of Canterbury's backing of a new campaign which aims to draw attention to domestic violence within the church. Kevin Bocquet reported on the matter, and the campaign was duly publicised. Its web address is www.restoredrelationships.org.

We heard from a "Sally", a victim of domestic violence who felt unable to talk to the Church about it because she didn't feel they would want to know, in the sense that she felt the Church to be a haven for people from the cares of life and that she would be spoiling their happy refuge by telling them her story.

Then we heard from the campaigners from Restored, founded four years ago to  provide detailed advice to churches on how to spot the signs and deal with the violence. Its co-founders, Mandy Marshall and Peter Grant, are starting to train clergy in the diocese of Salisbury next week.

Both they and Davina James-Hanman from AVA (Again Violence and Abuse), another anti-domestic violence charity, pointed to the difference between traditional and progressive believers here. They regard traditional believers' belief in a woman's subservient, obedient position in marriage as a problem.

Were I not treading nervously around such an important topic I would probably tag Sunday's liberal, progressive worldview to that position and cry 'Bias!' [against traditionalist Christians] here.

Still, good luck to them. 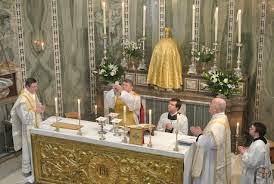 The next topic was more traditional Sunday territory:

The Ordinariate - an Anglican breakaway group that joined the Catholic Church in 2011 - is trying to attract more members in order to survive. We discuss what its role should be alongside the two Churches.

I once described myself as a would-be-Ordinariate atheist, so the fate of the Ordinariate - a gift from Pope Benedict - is of interest to me. I recall Damian Thompson getting particularly irate about Sunday's initial sniffiness about it, and heard some of that myself.

Here, however, no such complaints could be made as Ruth Gledhill, former Times religious affairs correspondent turned writer for The Tablet and Christian Today, discussed it with Ed Stourton. Ruthie was delightfully upbeat about it, saying it's "doing well" and "surviving much better than some people thought it would". She also said that it's "something of a gift to the Catholic Church." Though still small, it now has 1000-2000 laity and 100 or so clergy - and those clergy are boosting Catholic numbers, recruitment-wise.

She described them as "proper Catholics", but ones with elements of Anglican patrimony and liturgy and said that they fit in well with the modern world's "small is beautiful" ethic.

Ed Stourton then interviewed The Ordinariate's Ordinary, Mgr Keith Newton. Ed pursued  the "neither fish nor foul", "betwixt or between" angle with him [i.e. 'you're neither Anglican nor Catholic really']. Mgr Keith mentioned the position of the Maronites and Ukrainian Catholics to show the diversity of the Catholic Church.

Ed then pursued the topic of married clergy. Mgr Keith is married. Would he like to see that adopted more widely?, Ed pressed. Mgr Keith replied that there are also married priests in the eastern part of the Catholic Church and the Ordinariate's employment of married priests may be something the Church might look at but he doesn't think it's something they should be fighting for. 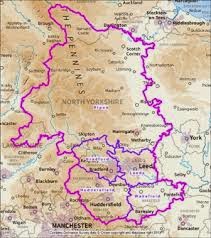 Then it was onto "an exclusive" (though whether Bishop Nick's latest invite from Sunday is a huge exclusive may be open to debate!):

In an exclusive for Sunday, Bishop Nick Baines, the man tasked to look after the Church of England's new 'super diocese' of West Yorkshire and the Dales has been keeping an audio diary account of his first few weeks in the job.

I won't dwell on this, but Nick Baines, Bishop of Leeds, is always engaging and for those will a taste for Anglican goings-on would have enjoyed this.

His massive new diocese came into being this spring, and Sunday has followed its formation quite closely. It replaced the old dioceses of Bradford, Ripon, Leeds and Wakefield. It covers 2,500 square miles and serves more than 2.5 million people. It has four bishops, 500 clergy and 656 churches.

Finally came the question, "How should the community in Rotherham respond to this week's revelations of child sexual exploitation on a massive scale by men of predominantly Pakistani origin?"

After hearing a brief selection of callers to the BBC's Asian Network (two of whom said that the Pakistani community has a problem and a third saying that women should be obedient to men), Edward Stourton interviewed Bradford councillor and imam Alyas Karmani [though Ed failed to mentioned that Mr Karmani is a councillor for the extremist Respect party] and BBC regular, community activist and Muslim convert Julie Siddiqi.

Mr Karmani mostly did what you would expect a Respect politician to do and said that inter-community sexual abuse is a matter for "any community" before blaming social conservatism and the "social construction of masculinity", "images", the "sexualisation of society" and "social media" #passingthebuck. Julie Siddiqi, less inclined to burrow her head in the sand, cited a Guardian article in which she'd been quoted, saying that "older male-dominated leadership" is a problem and that more women and young people should be engaged. Alyas Karmani responded by blaming "the agencies" and calling for a "multi-level" approach. Ed stuck with the issue of "empowering women", Julie said she wants cross-community dialogue beyond the gatekeepers and Alyas Karmani rounded the discussion off by saying that Muslims don't want special treatment, just fair treatment.

I'm not sure any of that got us very far at all, but then what did I expect?
Posted by Craig at 21:46