Tuesday 5th August 2014.
Today I’ve mostly been watching the BBC News channel. I really don’t know how anyone in their right mind could accuse the BBC of being pro Israel.

The BBC has leapt on the carefully timed, attention-seeking resignation of Sayeeda Warsi in order to undermine the conservatives and highlight the weakness in the coalition.
The BBC’s anti-Israel /  pro Hamas rhetoric has been especially noticeable after the gift that Baroness Warsi’s resignation has generously handed them. They snapped up the opportunity to show Crispin Blunt throughout the day, denigrating Israel in the way the BBC continually invites Israel-bashers to do.
“Go on go on,” they say. “More.”

The BBC bombarded us with pundits opining on the affair on and off, all day.

They kept showing Warsi trotting along to hand in her resignation.  One couldn’t help noticing the smirk she couldn't conceal when she knew she was being 'papped' outside number ten with her bundle of papers.

It seems the BBC with their handy band of Warsi-ists is in a world of its own, because the overwhelming number of below the line comments online seem to agree that her move was pure opportunism and that she suffers from delusions of grandeur.

Cameron’s shilly-shallying over Israel is simply the floundering of someone who’s caught between a rock and a hard place - he knows he should be steadfast in speaking out against terrorism and therefore in support of Israel, but has been blackmailed and intimidated by the media’s campaign against Israel. Mustn’t alienate the Muslim vote, and yet mustn’t alienate the UKIP vote. Oh dear.

What to do? Fall back on the disproportionate argument. This argument, as it’s presently being played out, is not being addressed in a direct or an honest manner because it skips the technical definition of ‘disproportionate’ and rests entirely on numbers.

To reiterate, proportionate doesn’t mean that the exact number of casualties must be equal. It has to take into consideration the cost/benefit, which can only be evaluated with hindsight. But ‘we’ don’t want to wait. ‘We’ want to condemn Israel NOW!.

Part of the government’s inability to stand up to the Hamas apologists is due to the BBC’s trial by cinematography.

Jon Donnison has become an amateur photographer. If you look at his Twitter feed, something I wouldn’t recommend and I wish I hadn’t b/c you can’t unsee stuff, it’s choc-ablock with pathos. Note deferential nod to Twitterese.

I’m not saying these images aren’t touching, moving and heartrending. They are. But that amount of overkill is desensitising, and now I can’t help seeing humour, specially in the one with the woman in a burka, eyes peering through the  slit, with Donnison’s comment below. 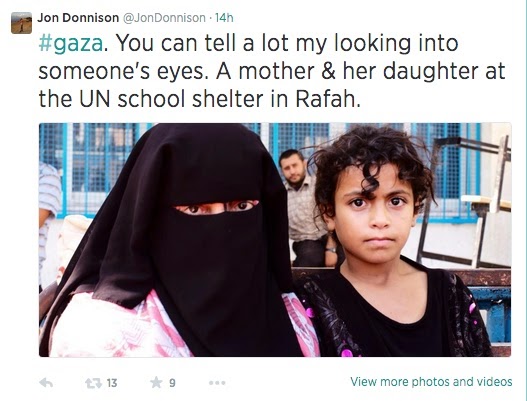 “You can tell a lot my(sic) looking into someone’s eyes. Mother and her daughter at the UN school shelter in Rafah”

It’s in the eyes, definitely. It has to be. 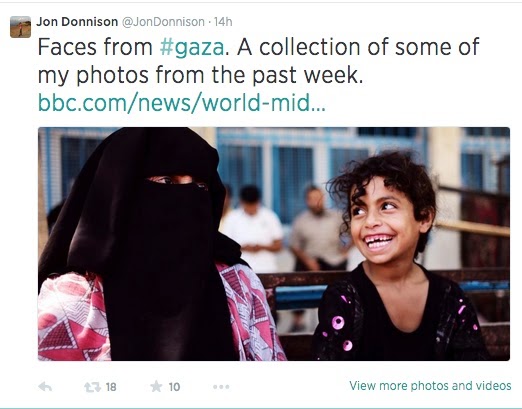 The daughter obviously has a sense of humour even if JD hasn’t, or a keen sense of the ridiculous.

He is going all out for pro Palestinian activism, with his pointed reTweets and cryptic remarks, which he gets away with under the “Tweets are my own” pantomime get-out clause.

Emboldened by public opinion, or what the BBC encourages us to believe is public opinion, (they obviously don’t read the btl comments in the  online press) more and more BBC employees are out and proud over their support for Hamas.

When Gavin Esler interviewed Mark Regev, his voice crackled with venom. When they got to the topic of the number of children killed, Regev  reiterated what Colonel Richard Kemp has said many times, namely that in comparison, “collateral damage” as it’s called when we do it (Baby killing when Israel does it ) is, historically, far greater in conflicts perpetrated by the UK and the US than by the IDF. “Israel takes great care to limit civilian casualties” he said. “It’s not working though is it?” said Esler, ignoring everything he had just heard, because he knew he could.

People will still be claiming that the BBC is too pro Israel because it has the gaul to allow Regev or Peter Lerner on to our screens, when they think Israel should be blackballed like the IRA was at one time, and have the few impudent statements it might be allowed to make, ‘voiced’ by actors.

In comparison to channel four, they might have a point. Krishnan Guru- Murthy and Jon Snow have managed to turn channel four into a creepy parody of the Islam channel. At least Jon Donnison’s attempts at photography have provided levity.

"Israel is bigger than Gaza and the West Bank, but it is smaller than almost everywhere else. Less than a century old, it is a democracy surrounded by hostile nations and under permanent attack by terrorists who wish to see it wiped from the surface of the Earth. What is a “proportionate” response to a hydra-like enemy who sees the Final Solution as work in progress? All terrorism aimed at Israel is genocidal in spirit. What would a “proportionate” response to that ambition look like?"