We went blackberry picking yesterday morning. We go to the same place every year - a headland near the village of Silverdale called Jack Scout which not only offers a huge expanse of brambles but also provides panoramic views over the world's most beautiful bay, Morecambe Bay (as they say in the brochures), with Morecambe and Heysham to our left, the Furness peninsula to our right, and the Lakeland Hills beyond (plus spectacular views of our local nuclear power station.) We watched a couple of oil rigs moving apart on the horizon, before drawing the fairly obvious conclusion (after a few minutes) that one of the oil rigs was actually a ferry making for Heysham harbour. I then closed my right eye and tested out the extent of left eye's failings. The horizon turned from a straight line into a blurry wave. I wasn't best pleased and took the following 'selfie' with a camera adapted to match the perspective I get through my left eye: 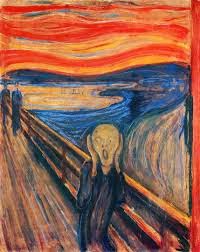 This year's harvest was far bigger than preceding years, though, curiously, there was no clumps of victorious-looking plump blackberries, merely a sea of medium-sized, mediocre blackberries - a flourishing, boring, egalitarian community of blackberries. Like Sweden.

Similarly, the pestering flies that like to troll your ears whilst you're busy, quietly picking away, seemed even more abundant than usual, and I wished I'd brought a can of deodorant along to ruin their day (though, in compensation, perhaps also give them the Lynx effect with the lady flies).

Still, as the family wandered about picking and then ate a picnic, I was pestered by something other than flies - the question of what to write about yesterday morning's Sunday.

This is a blog about BBC bias, so concentrate, Craig! What BBC bias did yesterday's Sunday demonstrate?

Oh, that reminds me of that old joke: Why did the supermodel stare at the orange juice carton? Because it said "concentrate" on it!

Darn it, stop distracting myself! Old jokes have nothing to do with BBC bias. (And 'Why did Jon Donnison stare at the orange squash carton? Because it said "concentrate" on it!' wouldn't be much of an improvement either.) Oh but....

Concentrate, man! What BBC bias did today's Sunday demonstrate? And how should I describe it?

Ah, maybe I could rant about it?:

Typical bloody Sunday! They invite on some do-gooder, namby-pamby, latte-supping, Guardian-reading Christian type to bash the government and business, and then follow that with the latest installment of their never-ending campaign to have commie 'liberation theology' archbishop Oscar Romero turned into a saint. Then they bang on about race and the riots in Ferguson (like the race hustlers they are) and round this all-you-can-eat-buffet-of-bias with that do-gooder, namby-pamby, latte-supping, lefty, Guardian-reading Archbishop of York praying for world peace - meaning pretty much peace in Gaza it turns out. I don't pay my license fee to put up with this kind of 24/7 bias. Scrap the BBC!

That's not really me though. So what to do instead? Plod though the programme as usual?

Well, some of the blackberries have already been consumed in a delicious blackberry crumble and it's now Monday, and the sun has taken its hat off, so why the heck not?

All humour will be surgically removed from the following post.
Posted by Craig at 11:25