Here is something for everyone interested in the coverage of the Israel/Hamas war.

I came across it, as you probably did, via a link on Harry’s Place, where one of Hadar’s excellent articles from BBC Watch is cross posted, and which you’ve undoubtedly already read. (If not, do it now.)

This essay entitled: An Insider’s Guide to the Most Important Story on Earth appeared in Tablet August 26th.
Matti Friedman writes as a former AP reporter but, this important essay equally begs questions of the BBC.
In the light of widely disseminated testimonies of senior BBC reporters stating categorically that they saw little or no evidence of Hamas using ‘human shields’, firing rockets from schools hospitals and mosques (In fact they hardly appear to have come across any official Hamas operatives at all) and most surprisingly, that they were not intimidated, nor was their copy compromised, by Hamas. 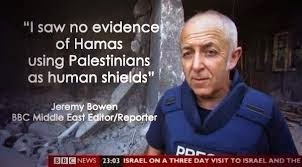 To summarise:
Perceived importance of a story indicated by comparative volume of press coverage.  (I read somewhere that there were more than 700 reporters dispatched to cover Gaza/ Israel in addition to the same number that were already there) I suppose that’s almost one reporter per casualty :-(

News organizations have nonetheless decided that this conflict is more important than, for example, the more than 1,600 women murdered in Pakistan last year (271 after being raped and 193 of them burned alive), the ongoing erasure of Tibet by the Chinese Communist Party, the carnage in Congo (more than 5 million dead as of 2012) or the Central African Republic, and the drug wars in Mexico (death toll between 2006 and 2012: 60,000), let alone conflicts no one has ever heard of in obscure corners of India or Thailand. They believe Israel to be the most important story on earth, or very close.

The Hamas charter, for example, calls not just for Israel’s destruction but for the murder of Jews and blames Jews for engineering the French and Russian revolutions and both world wars; the charter was never mentioned in print when I was at the AP, though Hamas won a Palestinian national election and had become one of the region’s most important players. To draw the link with this summer’s events: An observer might think Hamas’ decision in recent years to construct a military infrastructure beneath Gaza’s civilian infrastructure would be deemed newsworthy, if only because of what it meant about the way the next conflict would be fought and the cost to innocent people. But that is not the case. The Hamas emplacements were not important in themselves, and were therefore ignored. What was important was the Israeli decision to attack them.


There has been much discussion recently of Hamas attempts to intimidate reporters. Any veteran of the press corps here knows the intimidation is real, and I saw it in action myself as an editor on the AP news desk. During the 2008-2009 Gaza fighting I personally erased a key detail—that Hamas fighters were dressed as civilians and being counted as civilians in the death toll—because of a threat to our reporter in Gaza. (The policy was then, and remains, not to inform readers that the story is censored unless the censorship is Israeli. Earlier this month, the AP’s Jerusalem news editor reported and submitted a story on Hamas intimidation; the story was shunted into deep freeze by his superiors and has not been published.)

No coverage of Israeli politics or political history.

The fact that Israelis quite recently elected moderate governments that sought reconciliation with the Palestinians, and which were undermined by the Palestinians, is considered unimportant and rarely mentioned.

The “Israeli-Palestinian” framing allows the Jews, a tiny minority in the Middle East, to be depicted as the stronger party. It also includes the implicit assumption that if the Palestinian problem is somehow solved the conflict will be over, though no informed person today believes this to be true.

A knowledgeable observer of the Middle East cannot avoid the impression that the region is a volcano and that the lava is radical Islam, an ideology whose various incarnations are now shaping this part of the world. Israel is a tiny village on the slopes of the volcano. Hamas is the local representative of radical Islam and is openly dedicated to the eradication of the Jewish minority enclave in Israel, just as Hezbollah is the dominant representative of radical Islam in Lebanon, the Islamic State in Syria and Iraq, the Taliban in Afghanistan and Pakistan, and so forth.

When the people responsible for explaining the world to the world, journalists, cover the Jews’ war as more worthy of attention than any other, when they portray the Jews of Israel as the party obviously in the wrong, when they omit all possible justifications for the Jews’ actions and obscure the true face of their enemies, what they are saying to their readers—whether they intend to or not—is that Jews are the worst people on earth.

Understanding what happened in Gaza this summer means understanding Hezbollah in Lebanon, the rise of the Sunni jihadis in Syria and Iraq, and the long tentacles of Iran. It requires figuring out why countries like Egypt and Saudi Arabia now see themselves as closer to Israel than to Hamas. Above all, it requires us to understand what is clear to nearly everyone in the Middle East: The ascendant force in our part of the world is not democracy or modernity. It is rather an empowered strain of Islam that assumes different and sometimes conflicting forms, and that is willing to employ extreme violence in a quest to unite the region under its control and confront the West. Those who grasp this fact will be able to look around and connect the dots.

My highly selective potted summary doesn’t do justice to this must-read essay. If you’re interested in the subject (in the title of this website) please read the essay in toto.
Posted by sue at 09:50