I don’t think the ostrich actually does bury its tiny head in the sand 'in denial', but we do. Where there is a pile of something we don’t agree with most of us find it easier to label it ‘rubbish’ and dismiss it altogether than to take even a furtive little peek at it.  So that’s what we do.

Sometimes it’s understandable. For instance I don’t trouble to check out bonkers or antisemitic websites. Also, I don’t engage with arguments wholly constructed on pro-Palestinian /anti-Israel principles because even though their reasoning may well seem credible to people whose fundamentals come from the premise that Israel illegally occupies ‘Muslim land” and who oppose Israel’s continued existence, I accept that that reasoning will never coincide with mine. I assume it’s mutual and there would be no meeting point on either side.  At a pinch, I suppose that could be classed as head-burying.
However, I do look at material that is neutral or not particularly well-informed, and don’t stick to seeking out ‘confirmation bias’ to the exclusion of all else.

That’s why I find one particular Tweet by Jon Donnison more illuminating than all the rest of his partisan “views my own” Tweets put together. Here it is: 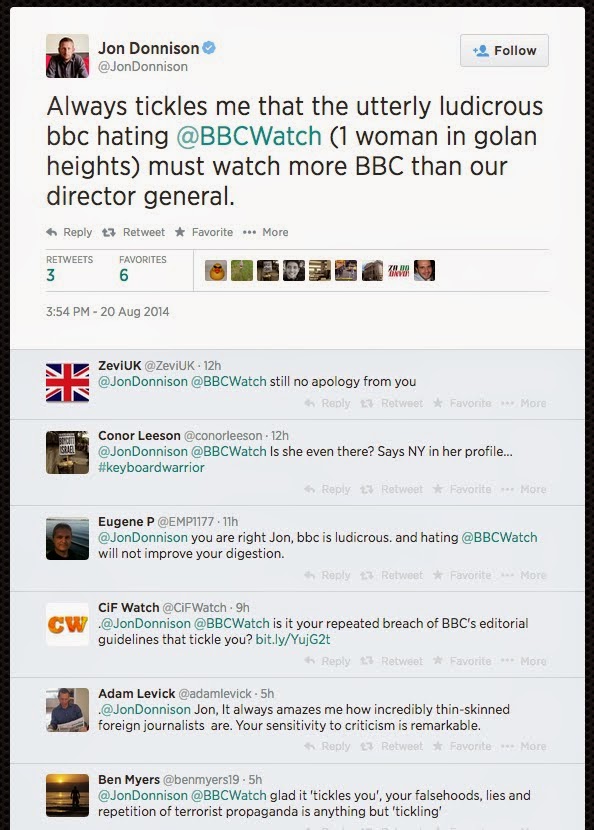 “Always tickles me that the utterly ludicrous bbc hating @BBCWatch (1 woman in golan heights) must watch more BBC than our director general.”
I understand that Tweeting is an art. Jon Donnison deserves a Twitter accolade for packing so much meaning into the character limitations of one tweet.

Meaning number one: “Always tickles me”  Pretending that he ‘always’ finds BBC Watch amusing is a patronising way of pulling rank. He’s above fretting over criticisms of himself but finds the antics of a lesser being amusing.
Number two: “(only)1 woman.” belittling (but desperate)
Number three: “in golan heights” insinuation that inhabiting ‘occupied territory’ equals vested interest in peddling propaganda.
Number four: “must watch more BBC than our director general.” Sarcastically citing ‘our’ DG as the quintessential television-output monitor whose TV watching credentials couldn’t be surpassed by ‘1 sad woman in the golan heights with nothing better to do’ how very dare she.

Never mind numbers one to four. That was a mere hyper-analytical preamble. It’s number five that’s the big give-away.
Have you spotted what it is yet?
LUDICROUS BBC-HATING is the answer we’re after. Jon Donnison dismisses all that meticulously researched and eloquently explained material as ludicrous? He rejects the lot of it and buries his head in the sand because he doesn’t want to know.

Christening it “BBC-hating.” Calling it “ludicrous”  clearly shows where you’re coming from. “Views my own?” They certainly are. For a BBC reporter who represents the BBC’s charter-obligated impartiality your history of one-sided Tweeting makes your position look quite ridiculous. Furthermore, if anything is ludicrous it’s your reflexive dismissal of every example of biased reporting carefully set-out on BBC Watch.

Upload albums-full of emotive images of photogenic children on your Twitter feed; link to fistfuls of  bias-confirming articles. Whip up your followers into antisemitic outrage while telling yourself it’s nothing to do with you.   Dismiss every allegation of unfair reporting with one fell swoop;  no-one’s in the slightest bit tickled.