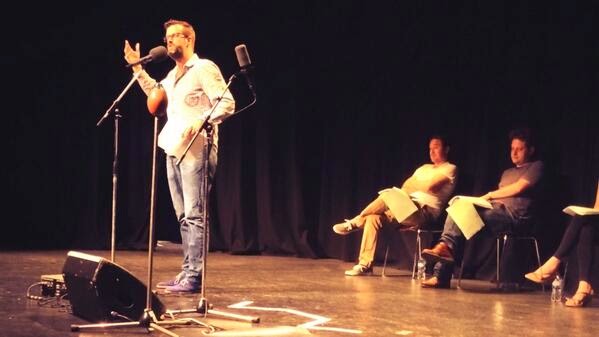 Marcus Brigstocke's new series of The Brig Society began this Friday. It was a laugh an hour. (And it only lasted half an hour).

What did you miss? Lots of anti-UKIP rants and jokes, an anti-Daily Telegraph joke [what, no anti-Daily Mail jokes, Marcus? You're slipping!], some gentle anti-Lib Dem quotes, an attack on Geert Wilders (he's a racist), digs at anti-immigration audience members on Question Time (they're racists), some banker-bashing, digs at fracking, private healthcare providers and Eric Pickles, various points in favour of the EU, a section arguing how democratic the EU really is (it's very democratic, apparently) and a serious bit about a big business-backed transatlantic trade treaty that could bring asbestos back into our homes and destroy the NHS. Oh, and an pro-immigration rant too!

"I like the European Union", Marcus told us. "I love the NHS passionately", he also told us.

As an example of Marcus's sledgehammer style of humour, his mock election declaration contained the following candidates:

(No joke Labour candidate, of course.)


How does @BBCRadio4 manage to broadcast such bad comedy? The Brig Society is so bad. Sounds like it was written by sec school drama students
— The Bounder (@The_Bounder) August 2, 2014

Thanks to #TheBrigSociety even Enormous Ginger Cat is losing will to live. *desperately searches for #Hancock CD* pic.twitter.com/7YDVvqLI65
— F Eckersall (@HerFaithness) August 2, 2014

Why are the audience laughing at #TheBrigSociety ? What's wrong with them? Or have they been promised tix for #JustAMinute if they do?
— F Eckersall (@HerFaithness) August 2, 2014


#TheBrigSociety is anyone else listening to this @BBCRadio4 show? Is anyone else losing the will to live? #makeitbrigstop
— F Eckersall (@HerFaithness) August 2, 2014

#TheBrigSociety #BBCr4 with Marcus Brigstocke is humour of sledgehammer kind - not funny in any way. And this is only 1st of 6 episodes!
— William Cameron (@Bill_Cameron) August 1, 2014