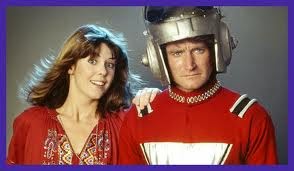 Like any other self-respecting blogger, I only (quite rightly) give credence to reports and opinion polls that back up my own beliefs, so I'm pleased to say that YouGov has it right over Robin Williams:

He certainly made me laugh in Mork and Mindy. (Not so much in The Fisher King though).

I was a mere boy when he first called Orson and said 'Nanu nanu' to Mindy's motorcycling granny, but I remember enjoying his performance at the time, and then enjoying re-watching him in my teens (though, as a teenage boy, I think part of the appeal of watching Mork and Mindy might possibly have been 'Mindy'.)

Reinforcing my own Morkish tendencies, I was driven by reading comments 'at another place' about there being too much Robin Williams coverage yesterday to do a classic 'Is' study into exactly how much time Radio 4's main news programmes gave to the death of this much-loved star. (There were complaints that the BBC was going OTT about him at the expense of what the complainants considered much more important stories like the genocidal goings-on in Iraq).

So for geeks and Orkans everywhere, here's a run down of yesterday's Radio 4 coverage. What did they cover? (Beam me up, Mindy!)

Well, Robin Williams' suicide certainly got a good deal of coverage, but then so did Iraq. The balance doesn't seem a problem to me.

Interestingly, besides the tributes, Radio 4 went for the mental health angle on the Robin Williams story - as befits a channel that sees itself as an adult channel. Eddie Mair's  PM interview with Prof Andreasson was genuinely thought-provoking. I kept thinking about it throughout last night - one of my lesser thoughts being about how difficult it must be to talk neuroscience and celebrity suicide in the course of one interview.

Other thoughts struck me too - such as how eager I am these days to flee into escapism (probably escaping all the cognitive dissonance). Panda stories? Yes please. The story about the anniversary of the birth of the inventor of the saxophone, Adolphe Sax? Yes please (despite the fact that his actual anniversary doesn't fall until November). Henry Thoreau? An escape into solitude and nature? Yes please. (Oh my goodness, yes, yes, yes!)

BBC Bias? Ah yes, almost forgot about that! (Easily done on blogs like this.)

Getting fancy-footed commie comic Alexei Sayle and some Graun journalist to talk about Robin Williams may reveal something about the Today mindset. (Possibly.)

And what about dismissing the deeply worrying Trojan Horse affair (a proven Islamic plot) by bringing on some 'hardline Christians' opposed to the government's promotion of British values?

Well, yes - though giving 'hardline Christians' like the likable Colin Hart a place on 'Today' raises all sort of other dissonances, cognitively-speaking, and then putting him up against a 'pro-government, pro-British values' figure like the likable Ghaffar Hussain from the Quilliam Foundation sends those very dissonances into regions full of cognitive whirlpools, the waves of dissonance apparently which cancel each other out and leave me grabbing onto any available flotsam in their wake.

What then about promoting the anti-grouse hunting campaign of environmentalists like Chris Packham at the expense of the Moorland Association (supporters of grouse-hunting)?

Well, yes, on 'The Glorious Twelth', giving prime airtime publicity to a 'greenie' campaign against 'landed' types certainly does smack of lefty bias, but the actual debate (on Today) between the passionate Chris Packham (who I've both met and like) and Amanda Anderson of the Moorland Association was (again) genuinely thought-provoking with both Chris and Amanda making good points and Mishal Husain giving Chris Packham the harder time.

Chris, unlike some environmentalists (who are 'red' inside and 'green' outside, like watermelons), is genuinely interested in the plight of hen harriers. Unquestionably so. He loves sparrowhawks too. I, on the other hand, love sparrows, so I'm somewhat less keen on his favorites - though I too have gaped in admiration at them whilst they perch on the fence on the house next door, attempting (simultaneously) to stare them out and to steer them away from my chirpy little protegees.

Sticking with yesterday's Today, Alan at BBC was sharply critical of John Humphrys for pursuing the angle that the 2003 US/UK-led invatsion of Iraq is responsible for the rise of 'IS' (not us, me and Sue, but the genocidal Muslim maniacs formerly known as Isis), and I can see Alan's point. Admirer though I am of him in many ways, John Humphrys has never really tried very hard to hide his disapproval of the Iraq War. (He could, of course, be right though. With hindsight). It's his especial bias, and these kinds of interview tend to bring that bias out.

What though of Mishal Husain's encounter with the lawyer defending the prisoners' demanding voting rights? Well, only one side of the argument was interviewed but Mishal was full of interruptive fire whilst interviewing him and countered him (to my mind) pretty well. (I'm not on his side).

Was The World at One showing anti-government bias in spending a fair while on Jon Manel's investigation into how the Lib Dems' 'universal free school meals' pledge, now being put into law, is causing chaos in some schools? Hmm, it's anti-government, boo!, but it's more anti-Lib Dem so, as a rightie, let's say "hurray!" Actually, let's say it was (I believe) simple reporting of a problem and that Jon Manel is one of the more unpredictable BBC reporters (i.e he's annoyed me on many an occasion and pleasantly surprised me on others).

The ethics of testing un-trial-tested drugs on people (if they so choose) is one that always needs debating. The Ebola virus is bringing the issue back to the fore again. The Radio 4 discussions about it were involving and I'm still rather conflicted about the answer. Non-compulsion remains my touchstone.

PM 'went after' wicked capitalist success story Amazon but it gave that fine free-marketeer Milo Yiannopoulos a good go against an 'econsultant'.

Did you listen to these four programmes yesterday? What did you make of them? Were you seething about their bias? Or not?

For myself, I tried this as another 'Is the BBC biased?' experiment. What did I really find?

Well, some story choices that seems to reflect a left-wing way of thinking, but evidence of attempts to balance it with alternative views as well.

You, of course, have a few days of 'listen again' time to assess these four programmes for yourselves and to give an honest appraisal of them (as I've tried to do). What gets your goat? What delights your sheep? Please feel free to share (in more than 140 characters).
Posted by Craig at 22:29