There is such hypocrisy around at the moment. Not just the hypocrisy of the discord between populist (pornographic) compassion for the Palestinians and the same parties’ virtual indifference to the suffering of other victims of Jihad. There is the hypocrisy about antisemitism.

Because of the virulence with which Europe’s immutable under-the-counter antisemitism has flared up under the auspices of compassion for Gaza, certain prominent shit-stirrers are looking over their shoulders and wondering if any of it was their fault.

Maybe they really do think it’s alarming to see people waving banners bearing ‘Hitler Was Right’ slogans at their pet demonstrations and rallies; maybe the people who bombarded social and mainstream media with images and knee-jerk retweets do sincerely believe that hatred of Israel has nothing to do with antisemitism, but logic says that can’t be true.

As Hugo Rifkind tries to say in his Times article,(£) the very word Zionism  (a movement for (originally) the re-establishment and (now) the development and protection of a Jewish nation in what is now Israel) has been tossed around, and has now settled in - as a pejorative. It means when push comes to shove, (which looks like being more than just a glib phrase)  Jews, like everyone else, have ‘somewhere to go home to’.   Before anyone tells me that the Palestinians don’t enjoy the luxury of their own state, let’s just say they could have had one before, and they could still have one if only they’d stop hating Jews.

Unless they are intellectually incapable of employing logic, these Israel-haters must be well aware that the scale of their outrage is disproportionate. When challenged about their lack of compassion for other groups’ suffering at the hands of Islamist Jihadis, they say they have no truck with ‘whataboutery.’

In addition to Caroline Wyatt’s report about antisemitism in France, the BBC website features a report by Jenny Hill, which was originally shown on BBC Breakfast, August 7th. 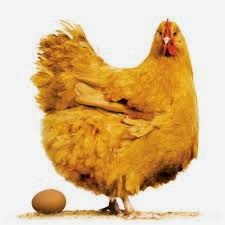 Hadar has written about this on BBC Watch. Far from reflecting on the chicken and egg question that might occupy the minds of several doctoral students, as Hadar jests, Jenny Hill plumps for the chicken (Gaza) taking responsibility for the egg (antisemitism).

She’s saying if it weren’t for Israel’s habit of killing babies, people wouldn’t particularly hate the Jews.  Of course this is not borne out by the facts.  Neither Hitler nor the Grand Mufti had Israel as a convenient excuse.

If Israel’s option to retaliate were permanently disabled because, say, its allies unwisely chose to confiscate its arms, or because Hamas’s deliberate child-martyring strategy deterred it from taking any military action, Israelis would be destined to live in a permanent state of war and the Jihadis would have won. That seems to be what people want, and if they don’t think that is in any way antisemitic, they must be living in cloud cuckoo land.

Articles penned by people who are scared that they might have to take the blame if the antisemitism they’ve whipped up should boil over into something unseemly, are now back-pedalling just to be on the safe side. You can hear the brakes squealing.

They still refuse to entertain the possibility that they could be wrong about Israel. The emerging de rigueur caveat, which serves as a flimsy insurance policy against the potential consequences of too much Israel-bashing and too little Jihad-bashing is only another version of the ‘some of my best friends‘ excuse.

They all say the same thing, namely “we must guard against antisemitism, which is truly awful, but we’re still condemning Israel for defending itself. Furthermore, we’re doing so in a way that would never stand up to scrutiny, we could never justify or in a way we would never demand of any other country.” In other words, we’re singling out Israel for blame because it’s the Jewish state.

Hugo Rifkind is saying it too. Even though he’s never self-identified as particularly Jewish, rising antisemitism is making him identify as such now. But he doesn’t defend Israel.

“Look. It’s not as if I think that Israel is doing the right thing. Far from it. In my view if your only military success entails bombing a country where 50 % of the people are under 18 then it’s not a military strategy you should be following.”

I’d like to hear his suggestions, but he hasn’t offered any.  However, he hasn’t been doing any whipping up as far as I know. He’s just casually absorbed the rhetoric of those who have.

Someone who has been agitating and stirring stuff up is saying something similar, and doing so even more disingenuously.
That someone is a strangely popular pundit with the looks of a child, the politics of a child and the quack of a child.

“I write this because antisemitism needs to be treated very seriously indeed. Attempts to belittle it are dangerous, allowing the tumour to spread unchecked.” Ah! A cancer allusion. I suppose antisemitism is like a cancer on the face of an old friend.
“But Israel’s assault on Gaza has highlighted another danger too. It has often been debated whether the charge of antisemitism is concocted against anyone who supports Palestinian justice or criticises the actions of the Israeli state. The principal objection is that such a tactic represents an attempt to silence critics of Israel’s occupation. Yet there are rather more dangerous potential consequences: not least that the meaning of antisemitism is lost, making it all the more difficult to identify and eliminate hatred against Jewish people at a time when it is rising.”

Antisemitism “needs to be” treated very seriously, he says. But I’m not going to do that, he says to himself. Instead I’m going to keep right on making cryptic allusions to the illegitimacy of Israel, and I’ll resort to that other antisemitic mantra, ‘the Holocaust industry”, which Jews use to shut down debate. But for today I’ll just all it the antisemitism industry, with the same implications, and if anything bad happens, don’t blame me.

The Guardian Op Ed is just as bad. They have been doing a great job of poisoning their fans against Jews and or Israel for years.  Suddenly they decide to cover their arses in case things get nasty.

“The controversy has gained extra heat because of the alarming increase in anti-Jewish racism.” “As we reported today, during the course of a single July week, eight synagogues in France were attacked, one of them firebombed by a 400-strong crowd, whose chants and banners included “Death to Jews” and “Slit Jews’ throats”. More chilling still, given that country’s history, Molotov cocktails have been hurled at synagogues in Germany, where chants heard at pro-Palestinian protests have included “Jew, coward pig, come out and fight alone”, and “Hamas, Hamas, Jews to the gas”. The lay leader of Germany’s Jews told the Guardian that “these are the worst times since the Nazi era”. In Britain too there has been a spike in antisemitic incidents, with monitoring groups saying July was the second worst month in 30 years. It is the same spike they see every time the conflict in the Middle East escalates. The common thread here is the conflation of Jews with Israeli conduct.”

Here we go. Israeli conduct. In other words ‘not lying down and taking it’, as we think they should.

The BBC’s report almost seems to be mocking the three Jewish interviewees who cite what appear to be trivial incidents. Name-calling - “People do get nervous that they’re gonna be verbally abused and things” says Esther, while her two kids happily munch away on their chocolate biscuits.

“People being followed by cars, and having “Hitler! Death to the Jews!” shouted at them” says a man. “I think it’s getting out of hand” says another. “people are getting more and more comfortable with being antisemitic.” Well yes. That does sound worrying, but in the scheme of things, tolerable.  Then we’re shown a clip of a man with a megaphone telling us what we should really be worrying about. “The death toll is increasing! It’s over sixteen hundred now” screeches he. “Most of them are young children” he adds. The film cuts to the talking head of Hugh Lanning of the PSC.
“We’re very clear that any form of racism isn’t tolerated on any of our protests” he claims. “And actually it’d be a distraction from the main purpose” “Our opposition is to what the Israeli government with the support of the US and the UK government is doing, and that’s where we want the focus to be”

What is he talking about? What Israel is doing of course. And, what is that, exactly? Defending itself, (the Jewish State) against a Jihadi group, a terrorist organisation, which is not only committed to Israel’s destruction, but equally committed to the destruction of its own sacrificial lambs.

That’s what our objection is to, he's saying. Not to Hamas. We object to Israel. It’s conduct, you understand, nothing more.
If that reasoning isn’t based on antisemitism I’d like to know what it is based on.

The last thing I’ll add is about people like Baroness Warsi paying lip service to 'opposing antisemitism'. If they didn’t, all that crowing against Islamophobia would lose credibility.

People hate and fear Islam for so many demonstrably valid reasons. People hate Jews because they do.  And the people who hate Jews make sure that Jews have two choices.:


a.) Submit to antisemitic-engendered attacks or b.) defend themselves in the face of intolerable  provocation.
Disingenuous crocodile tears about antisemitism from people who spout antisemitic politics aren’t fooling anyone.
Posted by sue at 20:12