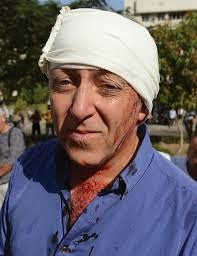 We've had a bit of a readership spike today, specifically for the post called Jeremy Bowen's Gaza notebook: "I saw no evidence of Hamas using Palestinians as human shields", which quoted the BBC's Middle East Editor saying just that in a New Statesman article.

This great interest has been generated by a rumour on social media:

BBC removed Jeremy Bowen from #Gaza for saying he had not seen any evidence of #Hamas using civilians as humanshields pic.twitter.com/ynoKwQtbXG
— Raajje News (@raajjenews) August 3, 2014

Soon the likes of Lauren Booth and Tariq Ramadan were tweeting their indignation at the BBC 'removal' of their hero from Gaza:

Jonathan Munro, the BBC's Head of Newsgathering, had to take to Twitter himself to squash the rumour:

So, now, relax Lauren, you man will soon be back in action!
Posted by Craig at 21:01