The importance of being Paddy 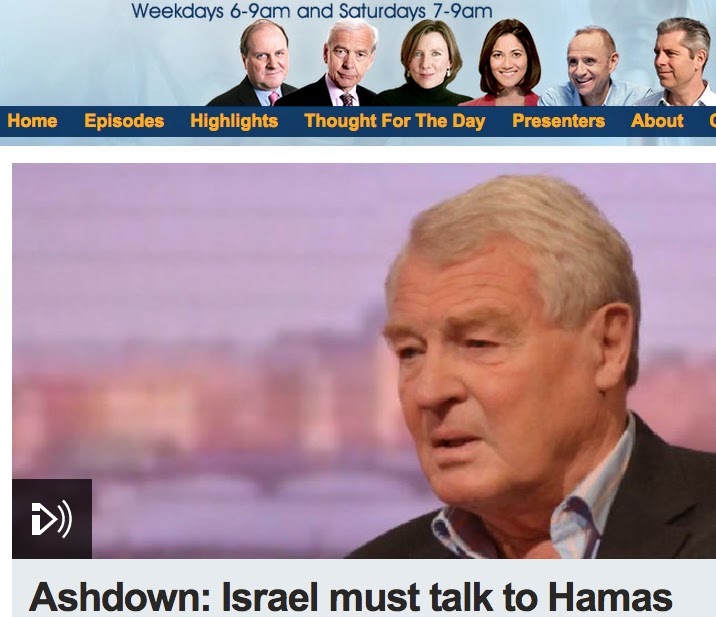 “Good Morning Sarah. Paddy will do.”  came the chummy greeting from ‘Lord Ashdown’.

“Do you share Clegg’s view that Israel must talk to Hamas?”

“Yes. The one thing we know now - after three weeks and over a thousand dead -  is that neither side can blast their way to victory.”

Well, Paddy, that depends what either side considers victory. Israel might consider it a victory to be left in peace. To exist. Hamas would consider that a defeat. Maybe “blasting”  is the only way, for at least one side, to achieve a victory.

“Peace is a process, not an event, and you have to get them round a table.” says Paddy.

I love the way people have to ‘sit down’ in order to achieve peace. Oh, and you need a table. There must be a kit with a table, some chairs and peace.

“How are you going to get peace without talking to them? “ says Paddy. “You have to talk to the most unpleasant people. Even the IRA!”

Paddy regards the IRA as more formidable than Hamas and Islamic Jihad put together. More unreasonable, more intransigent, more fanatical. Tiny detail, but I heard the IRA had to decommission before the talking.

“You have to call a spade a spade. Is it disproportionate? yes it is!”

Suddenly he’s on a roll. It’s as if a light has gone on behind those concealed eyes. Maybe he’s about to say things in haste, which, unfortunately, he probably won’t regret at leisure. Here we go.

Dud analogy?
Namely, Afghanistan and a spurious  analogy between the Taliban firing at British and US troops from civilian areas, and Hamas firing rockets at civilians in Israel; for years? Is Paddy really holding the conduct of ‘our’ troops up  -  as an example of ‘legality in war’ in comparison to the conduct of the IDF?

Indeed, there is some similarity in the human shield aspect of the analogy-that-isn’t-an-analogy. A small similarity. But what about Obama’s drones? Has Paddy completely forgotten those indiscriminate civilian casualties? Does Paddy disregard Israel’s restraint when we know it has the capability to inflict far worse damage with less risk to Israeli lives?

“Well,” says Sarah, leaving handfuls of misstatements and inaccuracies unchallenged, “the Israelis are 80% behind their government, so what pressure do you put on Israel?”

“Well,” says Oscar Wilde, “there are levers you could use...”

Levers?
I suspect he’s hinting that we should boycott, divest and sanction, and America should stop funding and arming Israel. In fact the Lib Dems are pushing to stop UK arms sales to Israel. Incidentally British-made arms were used against Israel in 1967.(Against civilians by the way.)

“Israel’s military action was foolish. They have the best anti-missile system in the world, they have a fantastic civil defence system, they’ve had, from thousands of Hamas rockets, just two civilians killed, they’ve multiplied that to 60 by this operation .....”

Only Two Civilians?
Paddy seems to be saying that because of Israel’s Iron dome and the bomb shelters, Israel’s civilians should endure thousands of rocket attacks while Hamas continues amassing thousands of rockets and burrowing tunnels to their heart’s content. Or until enough Israelis have died.

“.......created hundreds of thousands of terrorists, created the enmity of the entire Middle East, they’ve lost support and sympathy of world opinion. That doesn’t seem to be a good dividend from military action to be honest.

Enmity of the entire Middle East?
No. I don’t believe that is so.

That was Paddy Ashdown behaving like an utter handbag; perhaps not the fault of the Today programme.  Does Paddy wield much influence these days? I do hope not.

“There was meant to be a ceasefire in Gaza,” begins Sarah “But Israel has been striking dozens of sites this morning as it continues its search for a soldier it thinks was captured by Hamas militants....”  “Both sides blame each other for breaking the ceasefire...”

What was the fault of the Today Programme however, was that with two sound-bite-sized exceptions the entire Middle East coverage this morning was pure pro Palestinian propaganda.

Sound-bite 1: spokesperson for Israel’s foreign ministry promised:  “we’re willing to do anything to get our people back. Unlike the Hamas we cherish life and if we know that we have a kidnapped soldier we’ll do anything necessary, whether it’s by force or diplomatic means...”

01:35
The Today programme then consulted the opinions of Palestinian spokesperson Sabri Saydam, former adviser to Abbas and the LSE’s Fawaz Gerges, one of those ubiquitous pro-Palestinian Middle East experts whose hostility to Israel is never spelled out so the listener has to wheedle it out for himself.

Both gents were invited to speculate over the likelihood that all sides would turn up for another peace conference in Egypt with tables and chairs.
Instead, the former delivered a boilerplate litany of grievances and hate-filled rhetoric, after which the latter delivered another litany of grievances and pro Palestinian propaganda. Incidentally, while he was at it Gerges contradicted Paddy’s assertion that Israel has “created the enmity of the entire Middle East.” Sarah didn’t notice.