Gaza, WWI, Muslim charities and the banks & the West's guilt over Iraq

This morning's Sunday dwelt mainly on the Gaza conflict and on the WW1 anniversary, with side features on how some Muslim charities are being badly treated by the banks and on the West's responsibility for the present plight of Iraqi Christians.

If that sounds to you like a typical left-liberal-biased edition of Sunday then you wouldn't be far wrong.

1. "As the Middle East crisis intensifies, Matt Wells reports from New York on the US Government's response to the conflict."
Ed Stourton asked about public demos in the U.S. Matt Wells said the pro-Palestinian demos have been tiny while 10,000 people attended the New York "Stands with Israel" rally. (We heard a clip from Republican senator  from Charles Schumer, speaking to the crowd.) The White House's criticisms of Israel were in turn criticised by some Democrats. The first 'talking head' here was the World Jewish Congress' Evelyn Sommer, saying that the U.S. should not be criticising Israel at this time and should continue to support Israel regardless of casualties. The liberal organisation J-Street is also supporting the Israeli action. The second 'talking head' was Rebecca Vilkomerson from the Israel-bashing Jewish Voice for Peace. She says her organisation is growing, and denounced the pro-Israel lobby. Matt Wells said that, long term, the U.S. public's support for Israel is threatened, according to a new Gallup poll which shows that a clear majority of Americans under 30 think Operation Protective Edge is unjustified. It's "remarkable" how little support there is for the Palestinians, concluded Matt.

3. "HSBC wrote to a number of Muslim organisations in the UK this week informing them that their accounts will be closed. We examine why a bank might take a decision to close an account, and how a charity might fall foul of the rules."
It wouldn't be Sunday if there wasn't something along these lines. Does the Gaza conflict explain this?, Ed began by speculating (implying that the banks are coming under pressure from pro-Israeli sources?), but curiously this wild speculation wasn't followed up, merely left dangling in the air. He talked to Tom Keatinge from RUSI and Jahinger Malik from one of Sunday's favourite charities, Islamic Relief. Islamic Relief had its account closed by another bank back in 2012 and said they weren't informed of the process (or reasons) for the closure. Ed says "natural justice" would make many listeners think it's wrong to do that. Tom agreed, saying these actions can't help the banks' reputation. Ed took this "it's wrong" line and stuck with it, even though both his guests agreed with it. 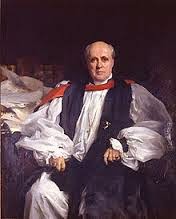 4. "Concluding our series exploring the views of faith groups at the outbreak of World War One, June Osborne, the Dean of Salisbury, looks at the Church of England's response to the war."
This was an interesting report from June Osborne. She's been looking through papers of Randall Davidson, the Archbishop of Canterbury during WW1. At the start of the war the main controversy facing him was the issue of whether clergy should enlist as combatants. He came out against it. A lot of clergy took no notice, however, enlisting as army chaplains and front-line soldiers. Archbishop Davidson was working at all different levels, making grand speeches and dealing with mundane things - questions such as 'What would the church do with their silver if the south of England was invaded by the Germans?' By 1915, more substantial issues - poison gas, conscientious objectors, etc - began to weigh on his mind. He saw the war as "a struggle on behalf of righteousness and freedom" through the Anglican Church's moral and spiritual weight behind the war and the need for a British victory, but he was far from oblivious to the dilemmas and tragedies of the war and was clear that war is "evil".

5. Iraqi Christians
This was an interview with David Walker, Bishop of Manchester. He's been talking to the Observer, so Sunday naturally gave him a ring. He mainly blames us, the West, for the present perilous plight of Christians in Iraq - specifically the 2003 invasion. "We are responsible for what we left behind", he said. His solution? We have to take them in, just as we did with the Ugandan Asians. "Our doors have to be open", he said, regardless of the numbers. Ed asked him about the present anti-immigration mood in this country. He replied that that mood needs challenging, saying that immigration helps to "grow the economy" and "enrich us". "Immigration doesn't harm us, it enhances us", he said - and Ed didn't challenge him on the point.

6. "We also get the perspective of the British Jewry and British Palestinians who have families in Gaza."
This was the counterpart to the earlier discussion in W. London. Trevor Barnes was in Hampstead, talking mainly to liberal British Jews. British Jews are "incredibly conflicted", said Hannah Weisfeld of Yachad ("pro-Israel, pro-peace"). Jonathan Arkush from the Board of Deputies described the present conflict as a "tragic war" but said "these are victims of Hamas". Various vox pops said that the conflict "tears us apart", that their sister in southern Israel has no protective room, and that she finds the Palestinians deaths "heartbreaking". Peacemaking rabbi Frank Dabba Smith said that Israelis are very, very depressed, seeing no end to the conflict. What of the rise in anti-Semitism? Jonathan Arkush said he was "surprisingly heartened" at what it is revealing about interfaith relations, praising both Justin Welby and the Muslim Council of Britain for their statements on the issue. Returning to the general topic, no subject is most divisive, said Frank Dabba Smith, saying that bringing people together is his aim. Hannah Weisfeld then rounded things off by saying, "You don't have to pick sides" and that the community "has to be for peace".

7. "In the first of two exclusive reports for Sunday, Dr Rowan Williams, Chair of Christian Aid and former Archbishop of Canterbury, reports on the desperate situation he found in South Sudan when he visited the country this week."
"A bit of a scoop this", said Ed - namely Dr Williams' "decision to moonlight as a reporter for this programme". The former AB of C says that South Sudan could be facing famine.

8. "The Rev Laurence Whitley, Minister of Glasgow Cathedral, looks ahead to the Centenary Commonwealth Service taking place in Scotland and tells the story of the four Anderson Brothers who lost their lives during the Great War."
Today is the 100th anniversary of the phrase "the lamps are going out over Europe", supposedly said by the British Foreign Secretary of the day on 3 August 1914. Rev. Whitley outlined the details of the service to mark the start of the war.
Posted by Craig at 11:38