The one where Ed Miliband makes a prat of himself

With nothing much going on in the world at the moment, I think I can safely sneak in another frivolous post in anticipation of another delightful week.

It has to be said that my own jokes at 'Is' this past week have been little better than Marcus Brigstocke's.

[Exhibit A, this joke from last Wednesday: "Q. What do you get if you cross Jon Donnison with a camel? A. A biased reporter'".

[Can you believe I actually received a tweet from Jeremy Bowen complaining, in less than 140 characters, that he should have been the punchline of that joke. So much for BBC collegiality, eh?].

Still, who needs me and Marcus when you've got I'm Sorry I Haven't a Clue, broadcast this week from (the Holy City of Karbala) Bradford?

A visit to Bradford's fine museum will reveal that the early history of the city is inextricably tied up with wool, so you can't read it.

The Brontes were the 19th Century literary family from the nearby village of Haworth. Most famous is Emily, who wrote 'Wuthering Heights', with the other Bronte sisters, Charlotte and Anne, providing backing vocals.

Their brother was called Bramwell, which was his mother's maiden name. He later changed it after his bank account was cleaned out by someone who guessed his security question.

There are many diverse products that originated in Yorkshire. The drug Prozac was developed here when clinical trials raised volunteers' spirits to a euphoric level of mild grumpiness.

And coming from Tadcaster, John Smith's Bitter. And who can blame him?

The area known as Little Germany is of particular historical and architectural in central Bradford. The name comes from the German cloth merchants who arrived in the 19th Century. But the area is best known now for its budget stores. However, the people of Little Germany like to keep up traditions and every September they invade Poundland.

The city is rightly proud of its rugby league team, known as Bradford Bulls, who did pretty well in Europe until they came up against Malaga Matadors, when they were slaughtered.

And we are today guests of Bradford's fine Victorian theatre, St. George's Hall. It was constructed by the same architect who build London's Apollo Theatre. The Apollo's ceiling famously collapsed last year - a disaster which was discovered to have been caused by old, weak material...so protect your heads as I say, let's meet the teams!

We even heard the latest about the programme's lovely scorer, Samantha. (Yes, she's still there, thank goodness).

Samantha has to leave now as she's off to meet her zoo-keeper gentleman friend. He's a bit of an expert with monkeys but occasionally has trouble with them when they get out of their pen. Samantha says he was delighted last week to see her as she arrived just in time to help him beat one off behind the penguin house.

Another old Radio 4 comedy favourite returned after a long absence this week. No, not Libya. Yes, Dead Ringers was back after seven years (or after seven hours if you'd been listening to Radio 4 Extra). 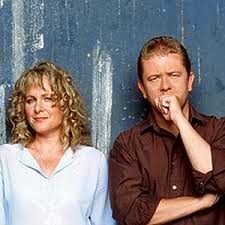 Jon Culshaw clearly wasn't going to let William Hague's atrocious timing (leaving office just before the programme's return) get in the way of him doing his trademark William Hague impression, and Jan Ravens was still doing all the women, and Diane Abbott.

No one on the team can really do Nigel Farage or Nick Clegg yet, and no one even tried doing David Cameron (said to be very tricky to impersonate well. Not even he can quite manage it), but someone did do a decent Ed Miliband impersonation:


Jim Naughtie: Now, Mr Miliband, you have also unveiled plans that, should you become prime minister, you will go round the country answering questions from the public. How will you resist resorting to rambling disjointed soundbites?

Ed Miliband: Well, Jim, I'm leave disjointed soundbites to other people. Let me say this. Look, the government is in a race to the bottom and that is a status quo I do not accept. There is a squeezed middle out there sandwiched by debt and the cost of living. And when I go on the doorstep I find that people up and down the country say to me, 'Look, we need a fair shot', and I believe passionately that I listen to them.

Hopefully, next week's edition will tackle Ed's opportunistic party political point-scoring over Gaza. The Graudinad quotes him as saying:

David Cameron and the Tories are wrong over Gaza.

I will be completely honest with you and say, look, yes, there is a squeezed middle out there and David Cameron is failing to help them. He should be playing a leading role in the efforts to secure peace. He should fly to Gaza and personally take out Hamas. Hamas are predators not producers.

But the prime minister is also wrong not to have jumped on the bandwagon in opposing Israel's incursion into Gaza. His refusal to jump on that bandwagon will be inexplicable to people across Britain and internationally. I am proud to say that I, on behalf of the Labour Party, am fully committed to jumping on that bandwagon. I believe passionately that it's no use prevaricating about the bush.

(Marcus Brigstocke is free to borrow that for next week's The Brig Society).
Posted by Craig at 20:24