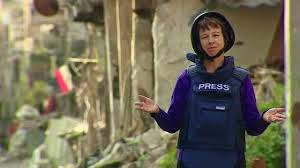 I bear Lyse Doucet no ill-will. I don’t feel any animosity towards her at all. At one time I found her accent intriguing, and many years ago I listened to a middle-of-the-night broadcast on radio 4, probably BBC World service, about her background and Canadian origins and thought it was fascinating.

Of course, since she’s been beating the anti-Israel trail, it is hard not to find yourself disliking her. I mean when she slunk over to the side of the street where the sun don’t shine, you had to wonder what went wrong. Somewhere, somehow she lost sight of the investigate/inquire/question side of the job and took up this depthless practice of unadulterated emoting, which no doubt she calls “telling other people’s stories”  I gather that’s what Alan Johnston would plead, when trying to reason with his captors who obviously weren’t impressed.

Craig’s transcript of Lyse’s contribution to Feedback is interesting. Thanks Craig, you’re a star. Your *transcribing* Brownie badge is in the mail.

“Every journalist now working on either side depends on further statistics - two sources of information: the Gazan Health Ministry...which I think is doing a fairly good job given the circumstances they're working under, gives us the figures of the dead, the injured, which are based on how many bodies come in the morgue, how many people are received at the hospital...and, similarly, the Israeli Defence Forces tell you how many attacks did Israel carry out, how many rockets were fired from Gaza, how many of them were intercepted by their very effective, American-financed Iron Dome system. So they give you all those.

And I think that, you know, both of them have a high degree of legitimacy. We're often challenged to say, "How come you're taking figures from the Hamas-controlled Health Ministry, but I think, by and large, they are as close as possible to being an accurate reflection.”

Hang on. They take the figures from those brought into the morgue? Then why not report them as figures brought into the morgue. I mean just because they’re dead doesn’t mean Israel killed them all.  How, then does the ‘mostly civilians’ statistic come about? Not all Hamas ‘militants’ are uniformed I hear, even as corpses. Not all 16 year-olds are innocent either, though they could technically be described as children.

I have heard many a foreign office type (I move in some weird and wonderful circles I’ll have you know) laugh and joke affectionately about the unreliability and unpredictability of your gun-toting Johnny Arab of the 1940s and 50s. They love ‘em to bits, but they know they can’t be trusted not to turn against one at the drop of a hat.

Funny that Hamas is now regarded by the BBC as just as truthful, trustworthy and honest as Israelis from the ‘only-democracy-in-the-region.‘ I put that in scare-quotes because it is a hackneyed phrase, but none the less true for all that.
Oh yes, that does sound fairly racist, but the bit concerning ambivalent Arabism is factual and the rest is conjecture based on that. So my generalisation is hardly any more racist than than Lyse’s generalising and trusting naïveté.

Hamas is a criminal and terrorist organization. It aims to wipe not only Israel, but all Jews off the face of the earth. It wants to replace Israel, the only democracy in the Middle East, by an Islamic state under Sharia law. Yet, our media, in Europe and America alike, tend to depict it -- after it kidnapped and murdered three Jewish boys in Israel and then, as it had been doing for years, resumed raining rockets and missiles into Israel -- as an organization that has been forced to use violence in reaction to Israeli aggression. And after Hamas deliberately committed the war crime of using its own citizens -- especially women and children -- as human shields in order to have bloodied victims for the television cameras, the media also depicted Hamas as standing for the human rights of the people in Gaza.

That’s from an article by Peter Martino entitled “The new Nazism’s First Victim: Truth. I cite it because it explains why we worry about the BBC’s cavalier disregard for the consequences of unbalanced reporting as well as the institutional avoidance of the ‘value judgment” that they seem to think constitutes fairness and impartiality, but which is not always appropriate.

“Misled by their media, who often distort the context in favor of what seems a juicier version of the story, and the cowardice of political leaders who refuse to speak out in support of Israel, people have come to see Israel as the aggressor, bent on driving the Palestinians into the sea, while the reality is exactly the opposite.”

Lyse actually says something like that herself:
“You know, back to our point about in all wars it's very difficult for security reasons, for propaganda reasons, to get to the full truth. I try to concentrate on what I see. And you can actually see, if you look hard enough, you can see a lot.”

But is she looking hard enough? She is back in the UK now after all. Is she really as blind as a Bowen? (TM)

"Well, where can they go? There's no place for them to go. It's such a densely-populated area that they've no other choice but to fire from in there."
One might speculate that ‘they would say that’ to a reporter, 'wouldn’t they?'. As for the densely populated meme I gather the ‘no other choice’ part is stretching it a bit. Quite a lot in fact.

Yes, but you're...In being a human being, I always say our journalism is defined by the question we ask. So we ask, "Why have so many children been hit?", "What was the target in this place?", "Why, in the case of Hamas and Islamic Jihad, why are you firing rockets from residential areas?"

So she asks everyone “why this” and “why that,” and doesn’t provide an answer. Then concludes:
“It's wrong. It's wrong to target the civilians.” Is she saying, (I think she is) that the conclusion she has reached is that she rejects all of Israel’s explanations, and believes they simply target civilians.

I’m willing to believe she is sincere. Her final statement comes across as an honest account of her good intentions, the best of which pave the road to Hell, remember. It doesn’t say much for her judgment.

I’d like the BBC to swap their reporters round for a trial period. A reshuffle. Send Donnison, Pannell, Doucet, Bowen and Knell to Israel with strict instructions to ‘tell their story’ and get Bethany Bell over to Gaza just to see if she remains as cool and dispassionate as she seems to be in Israel.