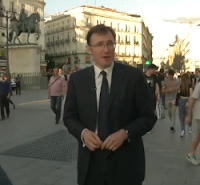 I didn't see Friday evening's BBC One News at Six, but others did.

Likewise the posh James political correspondent (the one who interviewed Cameron before the election) asserted boldly that the government had fallen behind the curve of public opinion on the migrant issue. As you rightly point out, that is just BBC PC bllx and by 10pm he had changed his tune - no mention of being behind the curve of opinion.

And here's someone at Digital Spy:

"the Prime Minister found himself behind the curve of public opinion, and has belatedly tried to address this".

How the heck did Landale know what "public opinion" was? How dare he state it like it was some indisputable fact? Like so many of his colleagues, he mistakes the siren voices of the Guardianista for "public opinion",

That original report has gone from the iPlayer but, by luck, is still to be found on the BBC website. At 1:48 you can indeed hear James Landale saying:

To his great frustration David Cameron has found himself behind the curve of public opinion on this - both at home and abroad.

As we now know, from yesterday's Mail on Sunday/Survation poll and, even more strikingly, from today's Sun/YouGov poll, this couldn't have been more wrong.

The public weren't - and aren't - anywhere near where James Landale assumed them to be on this issue. So this is another case of a BBC reporter reporting inaccurately.

The later report, also by luck (though not for the BBC perhaps), is now available on YouTube.

If you watch the two versions of the report concurrently you'll see that they are exactly the same until that 1:48 point. Then the later version leaps forwards by 17 seconds to the bit where Mrs Merkel and Mr Hollande criticise David Cameron.

Yes, the second video simply edits out the inaccurate/biased passage, with James Landale then editing in a tiny change of words (at the start of the Merkel/Hollande bit of the second version) to cover over the cracks - and cover the BBC's tracks. The two versions then run in parallel again until the final few seconds.

So yes, the BBC did change its tune over this as Friday evening went on (or got cold feet) and then edited their report to try and hide the fact.
Posted by Craig at 18:45