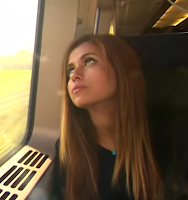 The last two posts reflect a feeling which I know some of you share: that the BBC is disproportionately (and emotively) focusing, visually-speaking, on the plight of women and children in the present migrant crisis...

...in contradiction to the apparent fact (widely agreed upon as far I can see) that the vast bulk of those 'invading' Europe at the moment are adult males.

I've seen a lot of those protesting comments.

And I've also seen lots of BBC News website articles which back them up...in that the photos used in those BBC articles do indeed appear to tend heavily towards including upsetting/cute images of women and children.

Whether that's a specifically BBC thing I rather doubt, but a 'BBC thing' it certainly appears to be - despite the BBC's claims to be the absolute epitome of impartiality.

I've been thinking about such things since last night's PM on Radio 4 - which began with an absolute bombardment of emotionally-upsetting reports, highlighting the plight of people heading towards Northern Europe.

For the fourth time...(and I've actually listened to very little of the BBC in the past fortnight, so there may have been many such reports)...I've heard the BBC's Hungary reporter, Nick Thorpe, reporting the calls of migrants and foregrounding the same Hungarian woman from the same Hungarian charity in support of them.

The cynical (or romantic) side of me suspects - given that he seems to turn up wherever that particular female Hungarian charity worker turns up - that he's fallen head over heels in love with her and is following her around and broadcasting her views (critical of the Hungarian government, in support of the migrants) like a love-lorn, puppy-eyed teenager.

But I could be wrong.

Maybe it's just a coincidence that the lady with a name that sounds like a Hungarian version of 'Georgina' just keeps re-appearing in his reports.

And talking of romance and cynicism...

That evening's PM also featured a remarkable report from the BBC's James Reynolds - a report which also appeared on BBC TV:

I heard it and then watched, enthralled.

I really would like your opinion on this: Am I being unfair to James Reynolds and the BBC in protesting that the BBC chose and then very closely followed, from Turkey through Central Europe to Sweden, what seems to be a completely untypical migrant: namely a young, charming, intelligent, very pretty {despite Laura Bates & Co, something absolutely not to be underestimated}, non-jihab-wearing, English-speaking, female migrant from Syria (who, by the by, it seems, left her widowed mother behind in Turkey)?

My thoughts last night, as I was lying awake, awaiting sleep, were to post something satirical (at the BBC's expense) from the young woman's 'point of view', suggesting that James Reynolds was stalking her all the way across Europe (which he was, in a nice way).

For those of you who didn't watch the report...

...James Reynolds really did follow her all the way from Turkey to Sweden: talking to her in Turkey, interviewing her in the Balkans, contacting on her mobile phone at she neared Central Europe, being with her as she boarded a bus on the borders of Central Europe, reporting her avoiding the police (via bribery) in Hungary, relaxing with her on a train across Germany, and seeing her arrive safe and safe in Sweden.

Was that appropriate for a BBC reporter?
Posted by Craig at 21:45