When I used to write for Biased-BBC around 2009 - 2012 we would sometimes get comments mocking our fear of terrorists, which they would spell ‘tewwowists’ to emphasize their contempt for us and imply that we were scaremongering for our own dark political purposes.

Today the threat level is rated severe. The live interview with Andrew Parker, Head of MI5 on the Today programme was described as unprecedented. It was a valuable item and a good editorial decision to include it. 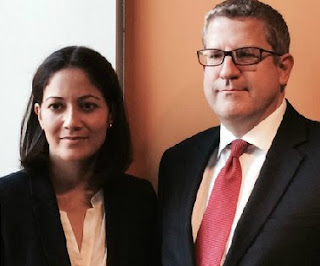 Mishal Husain began her questioning gently, but soon her stern schoolteacher’s voice appeared. Andrew Parker was so unflappable and matter-of-fact that he must have won her round. The harshness of her adversarial tone almost seemed to soften towards the end of the interview.

The BBC’s line of questioning took the ‘snooper’s charter’ position, which I suppose was legitimate, given that there are a lot of people who hold the view that MI5 would love to spy on us all, given half a chance.

Coming soon (7:44) after the item about the 14 year-old Muslim boy:  “arrested over clock” http://www.bbc.co.uk/news/world-us-canada-34266389 (because officials thought he was a tewwowist) and shortly before a brief discussion, (at 8 mins to 9am) with Gordon Corera and Shami Chakrarbarti about Andrew Parker’s interview, it seemed that, on the whole, the thrust of  the Today programme was slightly weighted towards the position of individual liberty and human rights, and therefore slightly against further empowering the security services, with the implication that the greatest danger of all was of MI5 having ‘too much’ power.

Gordon Corera asked why, now, would the MI5 chief appear live, then told us that it must be because of the severity of the  threat. (Duh!) He said there are ‘concerns over privacy’, and with new legislation coming up, how can MI5 ensure they get the capabilities they need, while being more accountable and more transparent.

Mishal reminded us that MI5 has a ‘trust deficit’

Shami Chakrabarti (we don’t hear quite so much  from her these days) congratulated the BBC on on the interview before outlining some of her concerns. She said MI5 had expressed no apologies or conceded that the security services had done anything wrong at all. (Perhaps they don’t think they have?)  She complained that communications between normally confidential bodies have not been treated as sacrosanct. She wanted better safeguards and “only ‘targeted’ surveillance.”

An argument hardly ever made to over enthusiastic defenders of our rights and freedoms, is that any inconvenience imposed upon us or impediment to our civil liberties for the sake of keeping us safe from “those who wish to harm us” is because of the fact that we are all victims of terrorism. Collateral damage in a way.

There is a point whereby refusing to alter our lifestyle in the name of ‘not letting the terrorists win’ leaves us so vulnerable that it actually does let them win.

Even so, I did think the interview with Andrew Parker had the most impact, and because of that I might forgive the BBC's rather feeble attempt to undermine him.