The BBC's war against Israel

Sleeping fitfully last night while  waiting for the moon to go red I heard Kevin Connolly on the BBC World Service delivering the audio version of  this piece, sparked off, he says,  by a new book named “An Improbable Friendship” by Anthony David.

The introduction he was intoning woke me up sharp. I can’t remember Connolly’s exact words, but this paragraph from the article sums it up:

“You may be familiar with the history of the 1967 Middle East War - a short, sharp conflict in which, Israel captured land from Egypt, Syria and Jordan in a series of lightning operations.”

I’m not sure that he actually said “You may be familiar with the history of the 1967 Middle East War”, but no matter, Connolly wasn’t going to be of any help to those of you who are not familiar with it. This may or may not have been entirely a bad thing, for whatever Kevin Connolly’s version of the history of the six day war seems likely to be - and I dread to think what it is -  I’d take a bet that we’re far better off without it.

So, it was “a short, sharp conflict in which, Israel captured land from Egypt, Syria and Jordan in a series of lightning operations.”

No reason, no rhyme, just a topsy-like event; there it was - it ‘grew’.
Let’s be clear, as pre-Corbyn politicians used to say. The six day war was a war of intended annihilation.  It was initiated by the Arabs with the intention of annihilating Israel. How cunning, how devious of Connolly to miss out the fact that Israel was fighting a defensive war.

I wasn’t too keen on this misleading,  emotive insinuation either:

“So Israel remains in control of the Golan Heights with its apple orchards and rolling pastures.”

Before the six-day war, Syria’s tanks and artillery were placed high on the Golan, 'apple orchards, rolling pastures' and all. The guns were pointing at, and visible from, kibbutzim below, posing a constant and ever present threat to the civilians living and working peacefully beside the Sea of Galilee. Make no mistake. In the spring of 67 there was a sudden, fierce escalation and a barrage of shellfire landed on Kibbutz Ein Gev.   Israel now controls the Golan for very good reasons. To protect Israelis and allow them to stay alive.

“And the West Bank of the River Jordan, with its huge Palestinian population and its growing number of Jewish settlers, is still under Israeli military occupation.”

If he doesn’t know why the occupation came about, he should damn well go and find out. He seems to think it’s because of unreasonable and unjustified warmongering by Israel, when the exact opposite is the case.
Of course he does know all this really. He chooses to leave it out. How should I describe the BBC’s war against Israel and what is their intention?

I am mildly curious about one thing. Not for personal reasons, just to clarify something that bothers some of us. Does Kevin Connolly think Israel "has the right to exist?" Does he think it has any legitimacy whatsoever?
Not that I care what Kevin Connolly thinks, but I am quite interested in whether he and his colleagues who report from the region actually have the authority - the BBC's blessing -  to represent the BBC by reporting everything that happens, and anything that takes their fancy -  solely from the Palestinian viewpoint.

I suspect that despite the ‘impartiality obligations‘ that the BBC is supposed to espouse, there is an inherent Arabist default position which nothing will budge. No matter how cognitively dissonant  this becomes, what with the ever increasing turmoil in the Arab Muslim world. Muslims fighting, killing each other; followers of Islam changing the face of Europe and making their presence felt in Western democratic countries that they live in, but dislike. How long can this go on and how far can it go?  I say that rhetorically.  Propagandising and emoting against Israel is all the BBC wants to do. 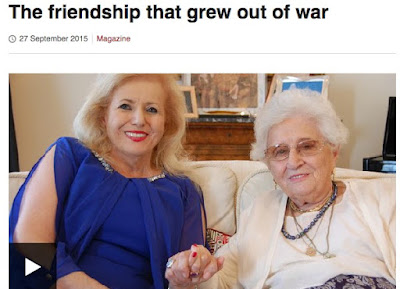 Anyway, this “improbable friendship” theme is interesting. It’s between 98 (and a half) year old Ruth, the divorced widow of  Moshe Dayan and a deceptively youthful looking Raymonda Tawil, the mother-in-law of Yasser Arafat and mother of the fragrant Suha.

Oddly, that portrait has found its way into the room and it looks as if it’s on the exact same easel as Suha's easel. Not so much a case of the eyes following you round the room, in this case the whole bloody picture follows you halfway round the world.   Is it a BBC prop? How bloody ridiculous.

Now, it’s all well and good that Kevin Connolly has this idea to make a film for the BBC about a heartwarming story of friends across the divide, based on a new book.  But it’s more than a coincidence that as far as I can tell this tale is seen (sigh) from the anti-Israel perspective. If I’m told that the book is less partisan that Kevin’s film, I’ll be delighted to hear it, but I’m doubtful.

Incidentally, another story about friendship and cooperation between Israelis and Palestinians didn’t catch the BBC’s imagination at all. Kevin Connolly didn’t choose to make a film about it, which seems a shame, as it involves another of the country’s favourite topics, football. I bet a film based on that would generate as much interest  - and do more good for the ‘peace process’ than, If I may say so,  this indulgent bit of flim-flam.

Ruth Dayan is indeed a sweet old lady, and no doubt she had a tough time being married to a man she said she should have divorced “ten years ago’” (I assume she meant ten years before she did divorce him) “for political reasons”. Kevin Connolly was keen to tease that out. 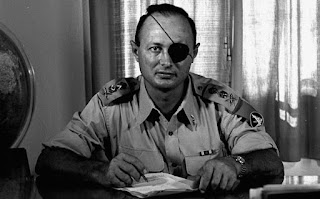 Moshe Dayan may have been a difficult man. He may have been a terrible husband. But let’s not forget that if it weren’t for Moshe Dayan and his brave brothers-in-arms, Israel would have been overrun by the enemies that surrounded it then (and still do) and Mrs Ruth Dayan may not have lived till 98 and a half to enjoy a friendship with Raymonda, the mother-in-law of that corrupt old rogue Yasser Arafat.

I had a little look, just to be sure. Just to make sure that Anthony David is as impartial as Kevin Connolly and the BBC would have us believe.

I went to Google, as you do, and saw that prof. Anthony David collaborated with Palestinian activist Sari Nusseibeh to produce an earlier, autobiographical  book “Once Upon A Country”

A review by Jeffry Goldberg is generous, but clearly states where the author is coming from.

“Once upon a country “ by Sari Nusseibeh with Anthony David.
“This is a rare book, one written by a partisan in the struggle over Palestine who nevertheless recognizes — and bravely records — the moral and political failures of his own people. This is not to say that Nusseibeh is a Zionist. For one thing, Zionists aren’t in the habit of quoting — approvingly — Noam Chomsky, and Nusseibeh catalogs, sometimes at unwarranted length and in exaggerated form, the sins of Israel, particularly the sins of occupation and settlement. And the narrative he presents in this book is undeniably the one devised by Arab, and pro-Arab, historians. There is no doubt that the 1948 war, which erupted upon the establishment of the state of Israel, did not end the way his family hoped it would, and Nusseibeh unpersuasively argues that the Jews were the Goliath in the fight, rather than the David. “

The new book "An Improbable Friendship" hasn’t been reviewed yet, and who knows, it might be full of surprises. But Kevin Connolly’s film tells a decidedly partisan tale, demonising Moshe Dayan, over sentimentalising or infantilising  his ex-wife Ruth just because she’s an old, old lady, omitting the context and background of the six-day war, giving undue respect to the Arafat family.

On the BBC World Service the continuity announcer thought it was sweet that she insisted on including the 'and a half' in that 98 years old, just like children do. Somehow, that says a lot.