Sorry for the undeserved grilling

The Today Programme has issued a grovelling apology to Ms Hadid, having belatedly found out that the figure of 1200 migrant workers killed during the construction of the Qatar stadium applied to the whole of Qatar and not Ms. Hadid’s ‘vagina  stadium’. 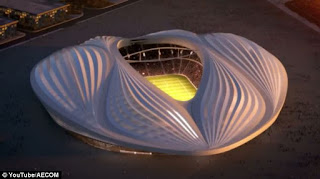 "The ITUC’s figure of 1200 construction deaths which was quoted on this morning’s programme refers to the whole of Qatar, and not specifically to the main World Cup stadium site. We are sorry we didn’t make this clear in this morning’s interview with Dame Zaha Hadid. We are happy to accept there is no evidence of deaths at the main stadium site."

That’s cleared that up then.
There’s a whiff of litigation in the air.  Since Ms. Hadid stated loud and clear that she had already successfully sued another party for making a similarly libellous allegation, you’d think the BBC’s researchers would have easily found reports of this case  through Mr. Google.

Hadid, who became the first female architect to receive the Pritzker Prize in 2004, is seeking damages from the New York Review of Books and a full retraction, as well as an immediate injunction on the review.

“Hadid claimed that passage was based on a February 2014 statement taken out of context, before work on the stadium had begun, and that there were no worker deaths at the site.”