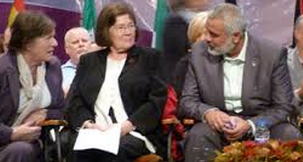 Watching today's The Andrew Marr Show, there was an intriguing bit during the paper review where Julia Hartley-Brewer and Andrew Marr discussed Baroness Jenny Tonge's possible defection from the Lib Dems to Jeremy Corbyn's Labour Party, as reported in The Sunday Times.

Jenny Tonge has been around the Lib Dems for a very, very long time. She's well known in the party and she wants to go to the Labour Party because she thinks Corbyn is more honest.

And that, indeed, is the Sunday Times story...

...though I have to say, on reading that story, I immediately strongly suspected the real reason Baroness Tonge feels so drawn towards Jeremy Corbyn has much more to do with her anti-Israel obsession than with anything to do with benefit cuts or the environment ...

...and when Andrew Marr raised the story with Lib Dem leader Tim Farron later, Sunny Tim's answer left me in little doubt that he thinks that's the real reason for her declaration too:

Andrew Marr: I’m sorry, but it appears that you no longer have Jenny Tonge.
Tim Farron: I spoke to Jenny Tonge last night. She’s not a member of the Liberal Democrats in the House of Lords, so she sits as an independent. So in so far as I own anybody, she’s not ours to start off with.
Andrew Marr: I see. But she regards Jeremy Corbyn as more honest than your party.
Tim Farron: I’m only half hearing you. So you’re saying that…can you tell me that again?…
Andrew Marr: She regards Jeremy Corbyn as more honest than you lot.
Tim Farron: Well she takes a view on Israel Palestine which she’s entitled to take. I believe in a two state solution. I also believe that you don’t get there by backing extremists who support violence. And so it’s very important, if we’re going to ever solve that incredibly important problem in the Middle East, you don’t do it by making out one side is the lone transgressor and you’ve got to make sure we have a solution which is going to work and mean that two state solution must come to pass. Netanyahu mustn’t be allowed to stop that. Neither should others who support the other side.

Actually, just checking out the BBC News website's take on this - a report from Ross Hawkins - and, expecting the worst (a mealy-mouthed focus on anything but what's really motivating her)...

...well, I was pleasantly surprised. Young Ross did good (I think)...

[...though I was only pleasantly surprised until I started really thinking about what Jenny Tonge actually said]:

And she said she was "favourably impressed" by leaders of the Palestinian militants Hamas.

Lady Tonge currently sits as an independent peer, but remains a member of the Liberal Democrats.

In a BBC interview she said she would decide "by Christmas" whether to take the Labour whip in the Lords.

"I have met Hamas leaders both in Damascus and in Gaza. So has Jeremy Corbyn," she said.

"We were all favourably impressed by those people. We all feel it was very very important to listen to their point of view.

"They said a lot of wise things."

Lady Tonge resigned the Lib Dem whip in 2012 after saying that Israel would not exist forever in its present form.

At the time the Board of Deputies of British Jews called the remarks "sinister and abhorrent."

Giving his reaction to Lady Tonge's latest comments, Gavin Stollar, chairman of Liberal Democrat Friends of Israel, said: "Jenny Tonge does not sit as a Liberal Democrat Peer in the House of Lords and for good reason.

"If she is as impressed by Hamas as she is with Jeremy Corbyn maybe she should stop threatening to join the Labour Party and take a principled stand by joining them."

Given that the ever-so-honest Mr Corbyn has been saying that his use of the word "friends" about Hamas was a mere courtesy, it may not be too helpful to have Baroness Tongue saying that he, like her, found himself "favourably impressed" by Hamas.

And only Jenny Tonge (or, maybe, Jeremy Corbyn?) could begin a comment about Islamic State by saying, "They're not friends, but..."
Posted by Craig at 15:54