The BBC and the Little Dutch Boy 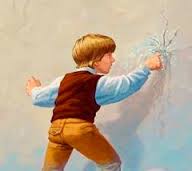 It's all getting a bit overwhelming, isn't it? The BBC's coverage of the migrant crisis, I mean.

The BBC is acting with the energy and ruthless indifference to nuance of a political party during an election campaign at the moment. They seem to be very seriously campaigning, don't they?

And now they seem to be realising, it appears, that they aren't 'winning the election' (cue a furious rant from Simon McCoy over my use of words there?) they are giving every impression of desperately going into overdrive and sticking their fingers (Dutch-boy-like) into every leaking dike they come across.

Others have spotted some telling examples of this today, starting with the latest BBC Trending piece by Mike Wendling (idea for a poem: "BBC Trending" half-rhymes with "Mike Wendling"), headlined This viral photo falsely claims to show an IS fighter posing as a refugee.

This is clearly meant as a 'Gotcha!', intended to counter widespread fears that lots of Al Qaeda/Isis/other Islamist nutters are entering Europe along with the other migrants/refugees.

This refugee is, according to the BBC report, a commander from the nice moderate Free Syrian Army and hates Islamic State, Al Qaeda and Assad. AP reported it thus, and Mike Wendling believes them (on trust).

A second example: The widespread raising of eyebrows that so many of these migrants/refugees carry expensive-looking mobile phone is met by a report from BBC reporter Gavin Lee, headlined The 'vital' role of mobile phones for refugees and migrants.

The 'scare marks' around 'vital' there prove to be completely redundant. Gavin's report is unequivocal that mobile phones are vital for the migrants/refugees, and he's not exactly subtle about it either. He asks man called Mohammed: "Tell me about your phone and how essential they are for you to travel."

The BBC isn't doing itself any favours at the moment. It risks seriously alienating a lot of people.
Posted by Craig at 21:27