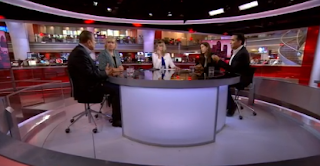 The discussion about the migrant crisis on today's Dateline London featured Polly Toynbee of the Guardian, Palestinian writer Abdel Bari Atwan, Bloomberg's Stephanie Baker and ABC News's Jeffrey Kofman (in other words, another Dateline panel tilted towards the Left).

Polly Toynbee concentrated most of her fire on David Cameron, using the word "cruelty" about his policy and saying that his proposal to take in some refugees directly from the Syrian conflict zone is "a profound error":

What he's doing is what dictators do, what communists and fascists do. They say the means will justify the ends.

Abdel Bari Atwan concentrated most of his fire on Western foreign policy - specifically Western military intervention. That's what's to blame for the refugees crisis, he said.

Jeffrey Kofman said things are only going to get a lot, lot worse but rejected complaints about the financial costs this crisis might have on European countries.  We shouldn't be "putting a dollar" on the lives of migrants. We should focus on their humanity instead.

Stephanie Baker agreed that things are likely to get much worse. She said that David Cameron's plan was "too late" but was a good idea, by-passing the people traffickers.

The pictures, especially over the past few days, have been just heartbreaking - women and children, babies, walking along highways. Is Europe, the rest of Europe, treating the situation any better than we are here in the UK?

I agree with Jeff about putting the dollar or the price on it but unfortunately that's what we see in the headlines, isn't it? Do you think that our government has been in a way shamed into changing their policy?

To my mind, neither seemed entirely free from personal opinions.
Posted by Craig at 13:23