“Filthy Jews Feet” and other fears

Yesterday I mentioned Lyse Doucet’s approach to her work as the BBC’s chief foreign correspondent. When working abroad she aspires to get to know the people who live in that country, so that she can properly present their views; for interest’s sake she tries to find something new or unexpected to focus on.

There’s nothing wrong with this noble and admirable aspiration, if only it were more evenly spread.  The BBC’s obsessional focus on Gaza and the Palestinian cause has been queried by many people. Those whose political sympathies lie wholly with the Palestinians will argue that this is fully justified, but even they must see that in accordance with the BBC’s charter some sort of  attention should be paid to the opposite point of view.

I know many people believe it is wrong for broadcasters to give a platform to outrageous ideas and evil regimes. For example, no-one seemed to think that ‘showing the humanity of the Taliban‘ was appropriate.
If Israel’s worldview is thought to be on a par with that of ISIL or North Korea, then I guess it’s okay to leave the British people with a vague impression that Israelis are mysterious warmongering zealots who ‘claim‘ this, that and the other, and whose spokespersons occasionally ‘say’ something dubious, though we should be sure to assume it is a lie.

However, since that is not the official position of this country, and I daresay it’s not the position of quite a few members of the British public, I don’t think it’s unreasonable to ask why the BBC sees fit to allow, say, Yolande Knell to represent the Palestinian point of view in detail and with considerable sympathy, without ensuring that someone of equal emotional attachment to Israel should be placed in situ, purposely to put Israel’s perspective before the British public.

One recent example illustrates where reporting falls short in this regard. It’s the trouble at Al Aqsa Mosque.  This topic has a long and complicated history, but few people will bother to look it up. eg., Elder of Ziyon has 200 posts tagged Temple Mount, The Jewish Virtual Library, here
and another  detailed history can also be found here.

We’re rarely reminded that the West Bank (previously part of the Ottoman Empire) had been under the British mandate since the end of the first world war. When the Arabs attacked Israel in 1948 just after its Declaration of Independence, Jordan illegally occupied the West Bank.

“From 1948 until the Six-Day War in 1967, the part of Jerusalem controlled by the Jordanians, again became an isolated and underdeveloped provincial town, with its religious sites the target of religious intolerance.The Old City was rendered void of Jews. Jewish sites such as the Mount of Olives were desecrated. Jordan destroyed more than 50 synagogues, and erased all evidence of a Jewish presence. In addition, all Jews were forced out of the Jewish Quarter of the Old City adjacent to the Western Wall, an area where Jews had lived for generations.For 19 years [1948-1967], Jews and Christians residing in Israel (and even Israeli Muslims) were barred from their holy places, despite Jordan’s pledge to allow free access. [...] It was only after the Six-Day War that the Jewish Quarter was rebuilt and free access to holy places was reestablished. “ 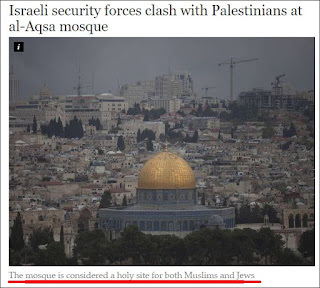 Readers of Yolande Knell’s reporting will find that the recent ‘clashes’ have been pitched to appear as though religious Israelis have made some kind of bid for supremacy over one of Islam’s holiest places, and to that end, have intruded into the Al Aqsa mosque, aided and abetted by the Israeli police force.

“......... the clashes that have taken place over the Jewish New Year’s holiday at the holy site you can see behind me: the Al Aqsa Mosque compound. Known to Muslims as Haram al Sharif – the Noble Sanctuary – this is the third holiest site in Islam and it’s believed that at that golden dome over there – the Dome of the Rock – that’s where the Prophet Mohammed ascended to heaven.

“..... in the Al Aqsa Mosque[...] where these clashes happened over the last three days. There were young Palestinian demonstrators who barricaded themselves inside the mosque. They were very worried about Israeli police bringing non-Muslim Jewish visitors – hundreds of them – to this site because of course for Jews this is Temple Mount and for Jews this is the holiest site in Judaism. Many people wanted to visit over the holidays.”

As Hadar of BBC Watch points out, Ms Knell says that Palestinians were very worried. (about Israeli police bringing non-Muslim Jewish visitors – hundreds of them – to this site)
By putting it like that, she’s giving credence to a completely unfounded fantasy. The Palestinians can ‘fear’ anything they like, from Mossad sending spies in the form of birds and fish, to Jews plotting to take over the world, but that shouldn’t confer upon Yolande Knell the right to disseminate conspiracy theories without explaining that that is precisely all they are.
If a reporter was dispatched to Jerusalem to get to know the Israelis and put their point of view in the way Lyse Doucet champions, we might hear, for instance, that those Muslim women who ululate and shout Allahu Akbar in the faces of non-Muslim visitors to the Temple Mount / Al-Aqsa site, are salaried. They are hired specifically to harass Jews who dare to venture into the compound. It’s a form of employment; job creation if you like.
If a reporter was sent to the region (to get to know the Israelis and present their point of view) we might also be told something like:

“in reality, the Israeli authorities are pursuing Palestinian rioters who took refuge in the mosque, and terrorists who were plotting to conduct attacks against Jewish worshippers.”

(From a piece in Algemeiner, headed ”Abbas: “Filthy Jews’ Feet Not Allowed on Temple Mount”) The piece describes a series of bizarre Tweets from “The International Union of Muslim Scholars” who are asking Palestinians to rise up against Israel and “rescue al-Aqsa” and “ divulge the plans of the Zionists”.
Perhaps the BBC should also have a go at divulging the plans of the Islamic Ummah, for the sake of balance and impartiality, in accordance with their charter.

“The hashtag #RescueAlAqsa is also included in a subsequent tweet featuring a picture of flames engulfing the al-Aqsa mosque, with a sniper’s target fixated on the dome of the mosque.

“Al-Aqsa is burning Oh Umma of a billion and a half Muslims!!!,” reads the slogan on the provocative tweet.

“The Al-Aqsa [Mosque] is ours… and they have no right to defile it with their filthy feet. We will not allow them to, and we will do everything in our power to protect Jerusalem… We bless every drop of blood that has been spilled for Jerusalem, which is clean and pure blood, blood spilled for Allah, Allah willing. Every martyr (Shahid) will reach Paradise, and everyone wounded will be rewarded by Allah,” Abbas said in a speech, segments of which were aired on official PA TV and posted on his website.”

Don’t you think the British public might be interested in reading about these bonkers-sounding quotations from the people with whom we’re always encouraged to empathise, and who, we’re told, are ‘just like us?’


If the BBC sent one of its trained foreign correspondents to Israel, to absorb the weird and wonderful ways of the alien beings that we’re constantly made to perceive as monsters, hell-bent on committing genocide on the Palestinian people, and if that BBC correspondent happened to find something unexpected or new, especially if they unexpectedly and newly found that Israelis are quite as ‘just like us’ as their soul-mates in Gaza and the West Bank, (or even more so) - then what would be so wrong with that? Some equilibrium might be achieved, even if some people won’t like it and don’t want to hear it.
Posted by sue at 14:39