Whether Winston Churchill actually ever said "A lie gets halfway around the world before the truth has a chance to get its pants on" is disputed.

Apparently Mark Twain, however, did say, "A lie can travel half way around the world while the truth is putting on its shoes".

That's a light start to soften you up for yet another grim post...

The YouTube video below makes it clear, beyond doubt, that the BBC got one of the most distressing stories of the past week wrong. ("Distressing", "very distressing" and "disturbing", according to the BBC - as you'll see in the various links below).

It records the BBC's Gavin Hewitt inaccurately describing the incident before showing Sky News's recording of what actually happened. The video maker alleges manipulative editing on the BBC's part:

Whether the BBC's switch from moving to still images, thus reinforcing Gavin Hewlitt's inaccurate version of what happened, was deliberately manipulative or not I simply cannot say. Gavin's version of events, however, was unquestionably wrong though.

For those who can't face watching the video, what he said was:

And then a really distressing incident happened. A woman who was carrying a small baby began crying for help. One of her companions tried to help her. Somehow there became a push and shove with the police and she was ended up on the railway lines with riot police trying to pull her back.

What actually happened was that a deeply distressed migrant grabbed his wife and baby and dragged them onto the railway track. The Hungarian police, far from being responsible for the woman and child ending up on the track, appear - from watching the Sky video - to have acted with considerable restraint and care.

Did the BBC News website ever retract their original version of events, so damaging to the Hungarians?

I ask because all I can see on the BBC News website is Gavin Hewitt's original report (the one cited in the YouTube video), plus various other reports giving the same (wrong) version of events: 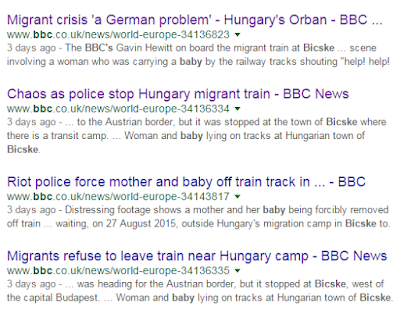 Checking out the other reports on that list tonight only makes the BBC's reporting seem worse.

The third report on that list ('Riot police force mother and baby off train track in...') comes from another BBC reporter, James Menendez. It shows only the later part of the incident with the woman and baby lying on the track, with the husband behind them, describing the situation as resulting from "scuffles between police and one family". The family "laid down on the train tracks", said James Menendez. Again, it looks bad for the Hungarian police.

The fourth report on the list - a later, fully-packaged report from Gavin Hewitt meant for the BBC's news bulletins - is the most bizarre of all though.

It actually shows the bit when the man grabs his wife and child and forces them onto the track. And yet, unbelievably, Gavin Hewitt's commentary (in the face of what every viewer could see with his or her own eyes) says:

One woman with a toddler started to protest. A desperate man travelling with her fell with the family onto the tracks and a struggle started with riot police.

And, as the Sky video showed at the time, the riot police only struggled with the man in order to restrain him and were admirably gentle towards the woman.

Yes, reporting 'breaking news' isn't easy, so maybe Gavin Hewitt's early report could be partially excused - though only 'partly' as he reported as undisputed fact something that wasn't true.

But his later report has no such excuse. Anyone watching his report would see the man dragging his family towards the train track, if not the moment when he got then onto the train track. Yet Gavin Hewitt asserted to BBC viewers that he "fell" and that "a struggle started with riot police".

I'm reluctant to put this down to conscious bias on Gavin Hewitt's part, as I don't think it was. I think it might just have been him seeing, in the heat of his emotions (and his bias), what he expected to see.

And failing to check. And simply asserting. And getting it wrong.

All in all, very poor BBC reporting.
Posted by Craig at 18:47