From the Left...and from the Right

Now, if there's one thing I do think we've shown here at ITBB it's that Gavin Esler's Dateline London has a strong left-liberal bias, especially in its guest selection.

Yes, it may have improved somewhat over the years (i.e. it is nowhere near as bad as it used to be), but the guest selection does still tilt heavily in one direction (leftwards).

Still, he's a short thread from Gavin Esler's Twitter feed (which I missed at the time). It encapsulates the BBC's favourite response to such criticism: 'We get criticism from both sides, therefore we must be getting it about right.' 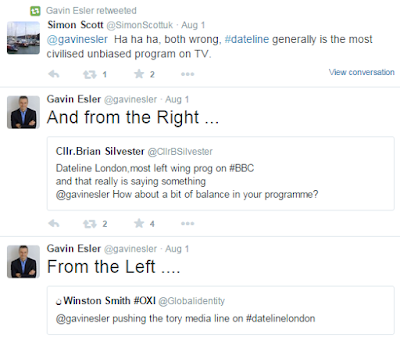 However, that response only works if the criticisms from both sides are as bad as each other. Someone saying "Gavin Esler is pushing the Tory media line on Dateline London" isn't the same as someone, say, chronicling the guest selection over a few years and providing lots of evidence to back up his claims of left-liberal wing bias (not that UKIP's Cllr. Silvester did that there either).
Posted by Craig at 13:23