Dame Zaha Hadid. A Bad Day for the Today programme.

The Today programme was in trouble this morning for ‘getting its facts’ wrong. The first incident was quite dramatic. 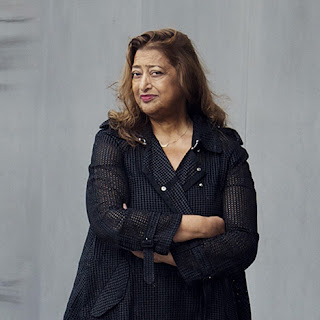 Dame Zaha Hadid has been awarded Riba's royal gold medal for architecture, making her the first woman to be awarded the honour in her own right.

Sarah Montague had the dubious honour of interviewing the good dame, and congratulating her on her prestigious prize. She mentioned the Iraqi-born architect’s reputation for being scary and abrasive.  Then she strayed into dangerous waters. It has been reported that 1,200 migrant workers were killed during construction of the architect’s famous  World Cup Stadium in Doha, Qatar.
At one stage the formidable Hadid was quoted as saying that preventing such things is "not my duty" as an architect. She now says quite categorically that nobody was killed. Not one. Nada. You ought to do your research properly, she said. Check your information before you say anything.

Sarah moved on, perhaps not knowing that she was heading towards other equally treacherous waters.   What about the Japanese Stadium that didn’t get built? She ventured. You pulled out.
I didn't pull out. Was that because the costs spiraled out of control? No! answered Hadid, furious by now. You have got your facts wrong and I am not going to continue with this interview.

With that she was gone. Gawn! Vamooshed.

After that hilarious 'Creature Comforts' excerpt from his holiness's speech at the White House, another minor example of (possible) factual inaccuracy occurred when the BBC mentioned the accusation that Greenpeace of sabotaging - 'trashing'  a potentially life-saving GM  crop of ‘golden rice”.

A spokesman categorically denied it.

Today was not a good day for the Today programme.

As the man said, it’s quite something when an interviewee manages to make me feel sorry for Sarah Montague. As in the case of Assad and ISIS, it’s sometimes hard to know which side to come down on. Here’s a witty appraisal of Ms Hadid by the renowned style guru Stephen Bayley.

“The Tokyo stadium resembled a monstrous acrylic cycling helmet. Why? Two of the grand old men of Japanese architecture, Arata Isozaki and Fumihiko Maki, damned her design as monstrous and wasteful: conceived with neither respect nor reference to its locality. That, of course, was almost certainly her intention. Global architects such as Hadid do not want to respect their client or his site, but to venerate themselves.

In any case, the locality Hadid prefers is the backyards of dictators and tyrants. Her latest buildings always win approval from supine architecture and design media, so work very well as salvation-via-design for repressive regimes. She has projects in various stages of completion or disarray in Libya, Iraq, Russia, Qatar, China and Azerbaijan.

The Qatar case, already soiled by the sordid Fifa shenanigans, is interesting. From the air, Hadid’s 2022 World Cup stadium with its almond-shaped opening and labial folds looks bogglingly like giant pudenda. Someone mentioned this and she said, if you think anything with a hole in it is a vagina, that’s your problem.”