BBC senior Newsgathering producer Tony Brown is on Twitter (aren't they all?), clearly marking himself as being 'BBC' on his Twitter feed: 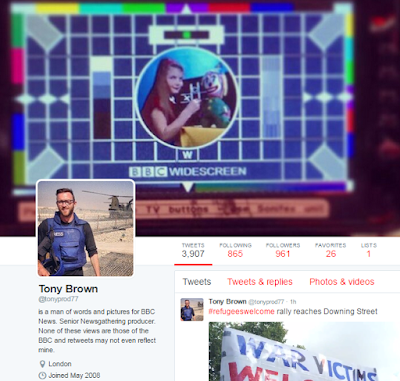 Tony has had a day off work today, but he hasn't been relaxing at home. No, he's been busy marching in London in 'solidarity' with 'refugees' - and (inevitably) he's been tweeting about it too:

At this point in the story our old friend DB enters the frame, asking Tony a question:

DB then quotes the BBC's own editorial guidelines at him:

Tony, doubtless caught up in the heat of the moment, remains oblivious to the danger:

And the discussion goes on:

The BBC editorial guidelines DB refers Tony Brown to are:

Campaigns 4.4.20
Similarly, the BBC must remain independent and distanced from government initiatives, campaigners, charities and their agendas, no matter how apparently worthy the cause or how much their message appears to be accepted or uncontroversial.

Impartiality: News, Current Affairs and Factual Output 4.4.13
Presenters, reporters and correspondents are the public face and voice of the BBC - they can have a significant impact on perceptions of whether due impartiality has been achieved.  Our audiences should not be able to tell from BBC output the personal prejudices of our journalists or news and current affairs presenters on matters of public policy, political or industrial controversy, or on 'controversial subjects' in any other area. They may provide professional judgements, rooted in evidence, but may not express personal views in BBC output, including online, on such matters.