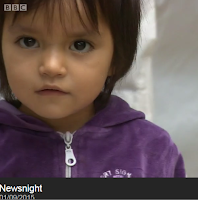 Amidst all the outpouring of praise for Germany on the BBC at the moment for inviting in vast numbers of refugees and asylum seekers from Syria and Afghanistan, it would be remiss of me not to mention a counter-point made by Newsnight reporter Secunder Kermani on last night's programme (whilst reporting from a refugee centre in Düsseldorf):

Yes, much of his report focused (visually) on images of women and children (as so much of the BBC's coverage seems to be doing at the moment), but along the way we got this startling passage:

But as well as those fleeing war zones, there are many from the Balkans.

Kosovans and Albanians are together responsible for more asylum claims so far this year than even Syrians.

Well, that's the first I'd heard of that.

Have you heard about that before on the BBC?

From everything else I've been hearing and seeing on the BBC, I've been led to believe that those travelling to Germany and Scandanavia through Austria, Hungary and Serbia, have been pretty much exclusively Syrian refugees.

From what Secunder Kermani said, it appears there might also be a huge number of economic migrants from Kosovo and Albania moving northwards through Europe too.
Posted by Craig at 20:19