Prof. Roy Greenslade's latest Guardian post has provoked a fair bit of mockery for its...ahem...biased take on the media's coverage of Jeremy Corbyn.

According to the Prof, it's only been the right-wing media that's been "demonising" Mr Corbyn and, looking to the future, he reckons that such a state of affairs will continue, with (in contrast) the Guardian and the Independent being "likely to offer impartial coverage".

Many a commenter at his piece points out that the Guardian has (with the exception of young Owen Jones) been anything but impartial in its coverage of Jeremy Corbyn so far. I've seen many comments in recent weeks (on left-wing and right-wing sites) noting that the Tuscan Brigade at the Graun (led by Polly Toynbee) have, in fact, been been strikingly anti-Corbyn - and today's comments seem to support that.

Still, Roy Greenslade has an interesting passage about the BBC (who some of us might think of as also being part of the Tuscan Brigade):

It might be expected of a man of the left that he sees some virtues at the very least in Britain’s public service broadcaster. But he will not have been overly impressed with last Monday’s BBC Panorama, which his supporters regarded as someting (sic) of a hatchet job. Several described it as an establishment smear and Corbyn’s team argued that it was factually inaccurate and complained to the BBC to demand an apology.

It is unclear whether that programme was the reason for Corbyn pulling out of a planned appearance on Sunday’s Andrew Marr show.

Nor will Corbynites have been amused by the piece to camera in the BBC news bulletins on Saturday by its political editor, Laura Kuenssberg. She suggested Labour had not learned lessons from its past.

"Now, you may have noticed we don't have the veteran radical himself this morning. Rather urgent meetings for him..."

That comment by Laura Kuenssberg, however, is an intriguingly partisan-sounding one. I'm trying to see if there's a video anywhere to back it up (so far with no luck). All I can see are tweets from far-left media campaign groups quoting her, disapprovingly: 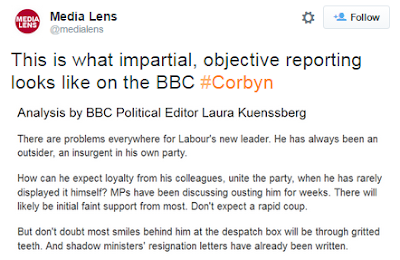