A couple of years ago we took a very close look at a 2012 analysis of BBC One's Question Time by academic and Labour activist Phil Burton-Cartledge, first published on his own blog and then posted at The New Statesman.

From a study of the programme's guest selection, he'd essentially proved that (contrary to what some might think) there's no significant evidence of bias - though he did add, rather teasingly, that there might perhaps be a slight pro-right bias in what he suggested was the programme's over-promotion of UKIP and its  overuse of businessmen (as compared to trades union leaders).

I took issue with his interpretations of both of those points, debunking them (to my satisfaction at least!), thus leaving us with his main point: that Question Time's panel selection shows a good deal of attention to balance, not bias.

He's now re-done his study, covering the 2014-15 season, and published the results in an engaging piece at The New Statesman headlined Is there left or right-wing bias on BBC Question Time?

His study comes free from any obvious spin and finds the following (which, as I like this kind of thing, I thought I'd share):

How does that work on the 'left-right' front?

Well, it mostly depends on how you class the Lib Dems - and this is where the remaining controversies over Phil's findings seem most likely to be found.

Where would you place them (besides in the dustbin of history)? Should they be placed on the left (given that they went through a phrase of describing themselves as a 'centre-left' party)? Or would you place them in the centre (thanks to Nick Clegg and the Orange Book, etc)? Or, as some wilder left-wingers would have it, given their involvement in the coalition (and Nick Clegg and the Orange Book, etc), would you put them on the right?

Phil places them in the centre - which, given that they were in government with the Conservatives for much of this period, doesn't seem entirely unreasonable, and some Lib Dems do still prefer to think of themselves as centrists (or 'the radical centre', as they like to put it).

Thus, according to Phil's figures (and interpretation of them), the right got 53 slots, the centre got 24 and the left got 58.

That's a slight imbalance towards the left but, Phil argues, that's countered by the other guests (journalists, celebrities, businessmen, union leaders, academics, campaigners, overseas guest and religious leaders). Among those the left take 24 slots, the right 31, the centre 2 slots and there's one who couldn't be aligned in any direction.

In terms of political content as provided by the guests there is more or less a balance. That’s right – just because you have a load of right wingers on one week or a plethora of lefties the next doesn’t mean it’s biased one way or the other: they balance out over the course of the season. And if this exercise is repeated across all of the seasons a tiny tilt either way will be repeated again and again.

Of course, it's always open to lefties to say that Liz Kendall is really a Tory or for righties to say that Ken Clarke is really a lefty, and so on and so forth ad infinitum, but such games can leave the accusers looking a bit daft to those outside their respective bubbles.

And it's always open to people to say that the Lib Dems are a centre-left party, so there figures should be counted into the other left figures, thus producing a much stronger bias towards the left in the overall figures (53 to the right, 82 to the left).

One of the other interesting things about Phil's 'occupations' findings, it that when it comes to journalists on Question Time, right-wingers outnumber left-wingers by a large margin. When it comes to celebs, however, it's the other way round. And the balance of business and unions produced two for the left and two for the right. 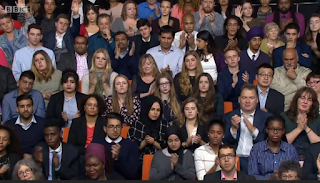 Phil does have some criticisms of Question Time though, and I found myself agreeing with him again here:

What concerns me most is the narrowing of the pool from which the producers draw their guests. This is by far the most egregious bias on the show. Journalists are incredibly over-represented and, if that wasn’t bad enough, eight of them were on twice. Ditto celebrities (unsurprisingly, six of whom were comics); and of the business people all three of them doubled up as reality TV stars.

That all three of the business people "doubled up as reality TV stars" and the most of the celebs were comics does seem typical of the present-day Question Time, doesn't it?


It never used to be like this. There was a time when the guests were drawn from across the occupational range – campaigners, business people, bishops and vicars, police, retired military personnel, crossbench peers, teachers, scientists, trade unionists. There was never a golden age of Question Time, but it did used to be much more representative.

Quite true. Or at least that's how I remember it.


This "diminution of guests from outside the circles of media currency (all the other guests outside celebrities and journalists had a media profile of sorts, be it an occasional CIF column here or a TV programme there)" then provokes a little sociological speculation from Phil:

[This] could be taken for reflecting where society is. From 1979 onwards, Question Time found expressed within it the social compact forged in the post-war period. As media influence has grown and the new settlement imposed in the 1980s and 90s dispersed the influence and standing of other professions, little wonder that media specialists featured so heavily.

Well, I think he'd have to 'unpack' that a heck of lot more to make it into a convincing point, but I'm back with him again when he concludes:

Question Time‘s producers don’t have to reflect this development. It could go out of its way and get “proper” business people on, grab an academic or scientist, call up some lawyer-types and perhaps, gasp, even consider approaching more trade unionists or local government voices. Politics stands accused of getting evermore remote – the BBC can play a small part reversing this process.

It might even be a bit less predictable if it added more businesspeople, scientists...er...and all the ones Phil wants too!
Posted by Craig at 00:03