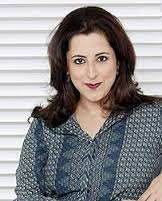 Time, I think, to gave up on Anita Anand's Any Answers for good. This will be my final post on the subject, lest they all keep saying the same thing ad infinitum. (Not that that's ever stopped me before).

It has to be said though that today's edition wasn't without interest. Some of the calls were very interesting, including one from a Kindertransport survivor.

The problem remains Anita Anand herself - and regular readers will know why by now.

Things went smoothly for the first ten minutes, with people mostly saying things Anita obviously felt comfortable hearing. (All the callers saying such things fared well today, being allowed to have their say, uninterrupted and unchallenged.) I was starting to relax.

Then a caller named Noah came on the line and began complaining about media manipulation and emotive reporting, quickly mentioning Rochdale and Rotherham. I instantly tensed up. I knew what was coming next: Anita Anand was going to take offence and all hell would break loose.

And break loose it did. She began raising her voice, emitting the odd "WHAT?!" of horrified incredulity (Simon McCoy-style), sighing, mounting her high horse and generally acting like the Grand Inquisitor. She 'invited him to repent' at one stage:

Yeah, there are those who will say...and there are those - I can hear them shouting at their radios right now - who will say, actually, it's the people who are fleeing barrel bombs, ISIS and some of the most unspeakable atrocities that human beings have had to face in modern history.

Within five words of his answer - after she inferred (doubtless quite rightly) that he wasn't going to change his tune - she crashed in again: "So that's NOT happening, Noah? You don't think believe that's actually happening?" She even thanked him for his call with a sigh.

She then invited a Kindertransport refugee (in his nineties) to have his say on what Noah had said. He replied, briefly, that the likes of Noah don't know what they're talking about. (He then moved on).

Contrast that with the caller advocating working more closely with Iran. You'll hear nothing but quiet, polite questioning from Anita there.

The only other caller to go off message (who wasn't totally blind, disabled and about to be evicted) fared better at the hands of Grand Inquisitor Anand, but only because he completely caved into her!

His original point had been that all these migrants would have to be housed, there's overcrowding in schools, the NHS is in trouble, there's austerity, and the poor, working class will pay the price. Anita duly got to work, delivering the following question/sermon unto the poor man:

Can I... can I...sure...Can I put this to you though? This is a CRISIS situation that is being faced and there are those who are saying, look, all countries have to do their bit. They all have to suffer some discomfort - if it comes to that discomfort. But you cannot sustain a situation where Turkey has almost 2 million Syrian refugees, Iraq 250 THOUSAND refugees, Lebanon 1.1 MILLION refugees, Jordan over 600 THOUSAND refugees, Egypt over 130 THOUSAND...the numbers go on and on...that there are some countries who ALSO are stretched, who are perhaps poorer than this country and who are HAVING to deal with this...I mean...influx of desperation...that it IS going to be uncomfortable for countries, but that is what a human response would look like.

I agree with every word you said. I don't know what the answer is. We need to do our bit. And I don't have a problem.

..which is the correct answer (for Anita). He then proceeded, bizarrely, to rant about Israel instead:

But what about Israel? Why doesn't Israel invited some Muslims in and share the grand gesture rather than criticising the prime minister of Hungary for being Christian? Well, let Israel show us how they are not a racist state.

That echoed an email Anita Anand had read out earlier in the show. So two completely out-of-the-blue criticisms of Israel on one programme where no mention of Israel could have been expected. What are the chances of that happening? (Sadly, they're probably getting ever higher).

And Anita didn't mount her high horse about that!

This, incidentally, was Anita's introduction to the subject (which dominated the whole show):

What a difference a week makes! The power of a single, tragic picture of a boy in the sea, summing up an ocean of human suffering.

Has it changed your mind about what needs to be done to solve a worsening refugee crisis. What do you make of the government's response? What about your OWN efforts? Do share them with us this afternoon....If you're unhappy with political responses then what would you have our leaders do? Perhaps you're afraid that while hearts prevail heads aren't thinking of a lasting solution. By helping those who reach Europe, do we risk a tidal wave of human suffering?....

But as columns of refugees attempt to gain entry into Austria and our screens are filled with images of long and beleaguered lines of human being trying to get out of one area and get into another in Europe, I'm asking for your thoughts on this


P.S. By coincidence, Cllr. Brian Sylvester, who appeared in an earlier post here today (being mocked by Gavin Esler), got 'copied into' a tweet about this very 'Anita v Noah' spat:

That's a rather pithier way of putting it!
Posted by Craig at 20:35