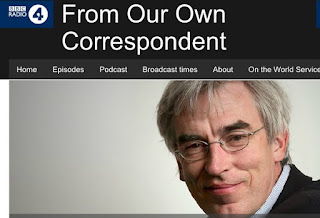 A fascinating programme that followed the Today programme this morning was the FOOC Anniversary Special.

We  heard some familiar voices, and there were several interesting contributions. I thought Lyse Doucet came across rather well. She always takes the trouble to consider criticisms of her reporting, or at least she tends not to dismiss them out of hand as some of her colleagues do. One thing I would mention was Lyse’s assertion that foreign correspondents get to know the people who live in the countries they’re reporting from, so that they can properly show and genuinely present their position.

Well, that’s all well and good, but what about the one-sidedness of the intensive ‘getting to know’ and ‘presenting their position’ of the people of Gaza, as opposed to the complete absence of anything similar from Israel? There are little or no human interest stories about Israel, apart from the odd technology or business section report. Yet reporters spend considerable amounts of time there. Why nothing, for example, about Syrians and Palestinians being treated in Israeli hospitals? Or the Israeli rescue teams that rush of to give aid in places like Haiti?
Tim Whewell’s emotive ‘piano in Gaza’ report, which was plastered all over the BBC’s many platforms, was pretty one-sided in terms of virtue signalling and emotional blackmail, and the absence of anything similar from the other side is one reason for all those pesky complaints from the Jewish lobby.

(Incidentally, there is no attempt to correct the misguided impression given by the BBC that electricity outages, shortages of medical supplies and so on are because of the blockade, when in fact they’re because of squabbles between Hamas and the PA)

Lindsey Hilsum outlines her stance on immigration here. She obviously regards opposition to unregulated immigration as a sign of right-wing racism.
There was a typical example of reductio ad absurdum from Ms Hilsum  when she said she has had complaints from people who “know that all the immigrants are men, so she shouldn’t show film of women and children - do they think I manufactured these children?”
Perhaps they actually said that as MOST immigrants are men, why SELECT only women and children to film?

Disingenuous twisting is nothing new from Ms Hilsum. I remember her anti-Zionist interpretation of Israel / Palestinian history, billed as impartial by Peter Kosminsky, who'd brought her along to validate the historical veracity of his anti-Israel fiction ‘The Promise‘ and to ‘educate’ the audience who had expressed an interest in learning about the background of the conflict, having watched his film.

Here’s my transcription of her statement:


“The last few weeks I have had more abuse on Twitter for my reporting of the refugee crisis than on anything else before. And people specifically telling me that I’m wrong to show children because there are no children, there are only young men, all terrorists; and therefor I’m inventing the children - kind of hard to invent children on television you know, with the cameraman. Takes a lot of effort. Um and basically abusing me for just humanising the story because there are people who don’t want the story humanised because they see it as political, and they’re very against more people, foreigners, coming into Europe, or particularly coming into Britain. That’s their perspective, their point of view, and therefore every time you humanise it you show an individual family or person’s story, that’s a problem for them. they don’t like it. And so I find that extremely interesting and I say that’s the most visceral, and the strongest response I’ve ever had on reporting that I’ve done.”

They used a clip of Michael Elkins’s sarcastic FOOC about the rudeness and insouciance of Israeli waiters -  to illustrate ” humour”. I wonder why they chose that?

“Do you still have to ‘sell’ your stories to the BBC?” Owen Bennet Jones asked Lindsey Hilsum, “or will they take anything you offer them?”
This ‘selling’ malarkey might explain why we get so many stories of a particular nature.

Lyse said she liked to find things the audience haven’t seen before. She found Parkour in Gaza, for example. I wonder if she also found the shopping mall or the luxury hotels?

I did think the programme was entertaining. It’s just a shame that it also revealed more of the BBC’s default attitude than they perhaps intended.
Posted by sue at 16:28