"Tell us your story. Tell us where have you come from. What's your name?" 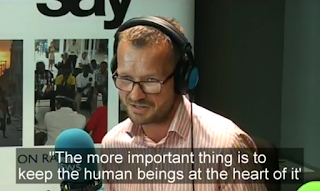 Here's something you may have missed: The BBC's head of newsgathering, Jonathan Munro, on the World Service a couple of weeks back spelling out the BBC position on how the migrant crisis should be reported (and which has been carried through right across the BBC):

The language that we use is...we're perhaps not in the same place as Al Jazeera on this, though I think we are in the same sort of debate as they've been.

I don't think there's anything wrong actually with using the word 'migrant' and the word 'refugee'. The vast majority of people that we're seeing coming through those borders, whether on land or by sea, are both migrants and refugees.

The issue...is more about the dehumanisation of people and the way we cover it, which isn't just a language issue.

When you're seeing 40,000 people coming through over a relatively short period of a number of weeks, what we're hearing on our radios and seeing on our screens are images and sounds that portray the volume of people and the way to dehumanise them is just to do that.

And the way to keep them as human beings - and this is a much more important point it seems to me than the vocabulary - is to talk to them, to hear their stories as individuals, as human beings, as opposed to as part of a trend.

So, you know, I was very pleased for example with some coverage that ran widely across the BBC where a reporter was on the island of Kos, which has just had a massive influx, as you all know, and the first thing he said as people literally got their feet wet getting off a boat was, "Tell us your story. Tell us where have you come from. What's your name?"

And it's that humanity which is actually more important than, you know, vocabulary boundaries that some broadcasters may choose to put in place.

We're not in the game of saying certain words aren't appropriate, as long as they're accurate and they reflect the story. The more important thing for us is to keep the human beings at the heart of it.